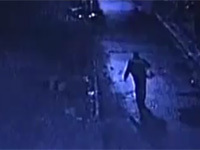 The tragic incident occurred on the evening of November 8 outside building 72 by Svetlanov Avenue. The man was taken to the Alexandrovsky Hospital with severe injuries (closed head injury, brain contusion, fracture of the lower jaw, contusions and bruises of the head). In the morning of November 11 he died from injuries without regaining consciousness.

There is a video (click to view) of the incident online showing a man walking through a yard with a plastic bag in his hand. The man was suddenly hit by a car tire with a wheel disk. The wheel landed a few inches from the man's legs and bounced to his head. From the impact, the man fell backwards.

Investigators also have video from surveillance cameras at their disposal, which shows a group of teenagers entering the elevator of the building, where the ill-fated wheel was dropped from. Later, young people came up to the body of the victim, stayed there for a few minutes and left. According to one theory, they threw the wheel from the window of the 11th floor of the house, said Fontanka.ru.

According to Life News, alleged perpetrators are found: it is a couple of teenagers who had already been detained.

According to the online agency, a 15-year-old high school student Darya and a 16-year-old student of a professional school Eric, in the heat of a fight, threw a car tire form the balcony of the 11th floor, which bounced off the ground and killed a 44-yearold resident of the neighboring house Victor Gubin, who was coming back from a grocery store. Gubin was taken to the Alexandrovsky Hospital with a closed craniocerebral trauma, extreme brain contusion and a fractured jaw. He died there the next morning.

According to the guy, he was fighting with his girlfriend and to blow off steam he threw the wheel from the balcony without looking down, said a source in law enforcement. The teenagers were easily identified from the video recordings of surveillance cameras installed in the building.