Kyrgyz Parliament To Replace Both President and Court

At the national referendum held on June 27, the overwhelming majority of citizens of the country (over 90 percent of voters) approved amendments to the Constitution proposed by the interim government of Rosa Otunbayeva. Kyrgyzstan will become a parliamentary republic and eliminate the Constitutional Court. 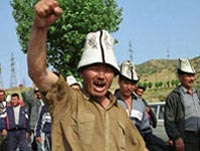 Kyrgyz Parliament To Replace Both President and Court

The official results of the referendum are expected to be announced on June 28. However, it is already clear that the changes in the Basic Law will come into force. The main idea of the representatives of the interim government of Kyrgyzstan was to eliminate the strong presidential power and prevent the emergence of a new dictator.

Russia Today: Kyrgyz people are tired of living from one decree to another

The executive power will be concentrated in the hands of the Prime Minister and the president's powers would be minimized. For example, in parliamentary republics of Germany and Israel, the president has in fact only representational and ceremonial functions and has little influence on domestic policy. Also, now the position will be limited by one term only (which will be increased from five to six years).

Rosa Otunbayeva officially becomes the President of Kyrgyzstan for the "transition period" until January 1, 2012.

The vote took place amidst internal instability in the country. A few days before the referendum, Kyrgyzstan (particularly its southern part) was wracked by ethnic riots mostly involving Kyrgyz and Uzbeks. The current authorities blamed the violence on external forces, namely terrorist organization such as the Islamic Movement of Uzbekistan and Union of Islamic Jihad, as well as clan Bakiyev. Notably, the observers from the OSCE and the Office for Democratic Institutions and Human Rights (ODIHR) refused to come to the republic due to safety issues.

The new Kyrgyz authorities secured a positive result of the voting from the very beginning, since they abolished the voting threshold and allowed voting without documents and at any polling station. Therefore, fraud cannot be ruled out because it is very easy to inject fake ballots under such conditions.

Interestingly enough, many opponents of such changes were revealed in Kyrgyzstan before the referendum. The deputy head of the interim government and the author of a new version of the Basic Law Tekebayev called them "destructive" and said that everyone will have to abide by the changes in his country, including CIS neighbors.

International authorities have controversial opinions about the idea of new Kyrgyz government. President Dmitry Medvedev expressed skepticism, albeit he said it was an internal affair of Kyrgyzstan.

"I have to say that this is an internal affair of Kyrgyzstan. I have a hard time imagining that a parliamentary republic could work in Kyrgyzstan, that it won't provoke a series of problems and encourage the rise to power of extremist forces," Medvedev said.

"Kyrgyzstan is confronted by many problems, notably the threat of breaking up. To avoid this you need a strong, well-organized authority," Medvedev said further.

Another significant fact is that the Constitutional Court in Kyrgyzstan (following a referendum) is expected to be eliminated. This raises the following questions: who will control the actions of the new government and will the prime minister become a new dictator?