A German citizen Johann Dertenbach was sentenced to 10 years in prison by a Moscow court for brutally stabbing his Russian fiancée. 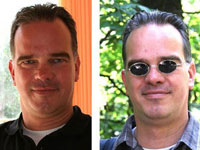 44-year old Johann Dertenbach was found guilty of an attempt of murder of his fiancée, who miraculously escaped. Now the cruel German is to spend 10 years in a correction facility, Komsomolskaya Pravda reports.

According to the investigation, Johann Dertenbach came to Moscow in 2009 for the summer. He first stayed in a hotel, but then decided to find a girlfriend to save money on rent. He began studying dating websites to bring his idea to real.

"The German introduced himself to all his new Russian friends as a businessman who had a timber company in Germany and Belarus. He also claimed that his family owned a Mercedes plant," said Tatyana Nefedova, head of investigative department.

According to the information discovered by Interpol, the “businessman” was a bartender back home who had criminal charges for failure to pay alimony for his four children and theft of construction materials.

On a dating website, Dertenbach found a Muscovite Elena who owned an apartment. She spoke decent English, and soon was actively corresponding with the German.

“My profile was on that website for a while; I even forgot I had it there. Once in a while I would get a letter from a guy, but I never answered,” Elena said. Dertenbach’s letter attracted her attention as being “beautifully written,” and she answered him.

When they first met, Elena did not like the German despite his athletic build and well groomed appearance. She thought she would see him to practice her English. However, Dertenbach seemed to have serious intentions. He gave Elena flowers, candy, and took her out to restaurants, not letting her pay for the meals. He attended to her every whim, taking her to car dealerships and promising to get her a Mercedes.

“He was very persistent, told me he loved me. I could not understand why it all happened so fast and why he chose me. But I wanted to trust him, and I did,” Elena explained.

The German moved in with her in her apartment. Then Elena took him to the city of Kirov to introduce him to his mother. They were making plans together and wanted to buy a house near Moscow and then go to Germany in summer.

“ His jealousy was frustrating at times . He read my letters and always demanded I told him who called me and why. I tried not to dwell on it thinking we just had different mentalities,” she confessed. Elena’s friends were telling her she was making a mistake and her fiancée was lying to her, pretending to be somebody he was not. She refused to listen to them.

On July 15, 2009, Dertenbach refused to eat his breakfast. “We did not have an argument, he just kept silent. He went into the kitchen,” Elena said. She stayed in the room, and then she heard steps. She did not have time to turn around, and only felt sharp pain in her back. Meanwhile, the German took the knife out of her back and stabbed her again.

“He looked absolutely calm. I shouted, first in English, then in Russian. He did not stop and kept stabbing me, completely silent,” she said.
Dertenbach stabbed her in the back six times, and five times in her chest and neck. When he saw her lying on the floor, motionless, he went to the kitchen and washed the knife.

“He peeped into the room several times to make sure I haven’t moved. I felt that if I moved even a little bit, he would kill me.”

Then she smelled cigarette smoke and realized that as soon as he finishes his cigarette, he will come back to finish what he started.

She could not run to the entrance door because he would see her, and the only other way out was through the window.

“I was tiptoeing. I was afraid I didn’t have enough time,” the victim confessed.

Elena was a gymnast in school, and it saved her life. She tucked her legs in and formed a ball when she jumped from the third floor and managed not to break anything.

“I landed on my knees. I was limping for two months, but compared to other injuries it was nothing,” she explained.

Elena was found by her neighbor who called ambulance and police.

Meanwhile, Dertenbach realized that his victim has escaped. He took 55,000 rubles ($1,800) that belonged to Elena and fled. He was going to fly to Frankfurt, but was arrested in the airport where he was quietly drinking his coffee.

After the arrest the criminal “forgot” all his Russian and refused to talk without a council and an interpreter.

Dertenbach never explained his motives. He first said that he was cutting cheese and accidentally cut the woman. Then he changed his statement and said he had no idea why he did it. He said that he was tired of Elena demanding love and attention.

Elena was in surgery for five and a half hours and was in a coma for a few days. She is still in a hospital and does not want to come back to her apartment.

“I am afraid that in a year he will be transferred to a German prison and will be released in a couple of years. And then he would come back.”