The Japanese enjoy healthiest, simplest, but not tastiest food on Earth

The secret of long life lies in healthy and simple food

It would be totally incorrect to say that the healthy way of living has become a popular trend in the modern society only. It was in all epochs that people wanted to live long healthy lives and suffer from no diseases at all. Many doctors insist that majority of health problems lie in bad unhealthy nutrition. 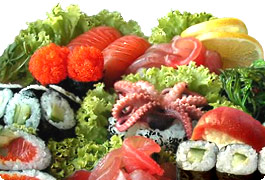 Every nation lives on the territory destined for it and eats food that is available in the place. And cuisine of every nation is in fact a unique imprint of the mode of living, territorial peculiarities and cultural traditions typical of every particular nation. At that, the more a nation is isolated from others, the more peculiarities distinguish its cuisine from others. Japan is an island-based country that was developing in isolation from the outer world for a rather long period.

The Japanese cuisine radically differs from any other in the world, including Japan's close neighbors in Asia. It is unlikely that someone may uncover all secrets of the Japanese cuisine. The selection of products and beautiful laying of the table allow us to enjoy the harmony of this cuisine.

The Japanese are squeamish in meals and cook only best products. At that, Japanese cooks do not pursue the objective of changing initial products but instead they aim at preserving their best qualities. They do not contest with the nature and reveal its new sides. The Japanese cuisine is based upon natural vegetable products, rice, fish and other seafood.

There are about 7-9,000 varieties of edible sea animals and fish. Japanese cooks prefer minimal thermal treatment of sea food. Maceration in vinegar is the most popular method to disinfect fish. So, the Japanese do their best to make their food safe and healthy to the maximum.

The warm waters of the Kuroshio Sea washes the Japanese islands. The sea is inhabited by a great variety of fish, crustaceous and molluscs. From the oldest times people living on the islands learnt to derive much profit from the water surrounding the country. This explains why fish is a steady component of Japanese meals. Today analysts say that the Japanese eat up to 20 percent of sea products caught worldwide.

In the old times, Japan was called the Homeland, of Rice. Archeologists state that the Japanese began to grow rice there over 2,500 years ago. The Japanese cuisine supposedly appeared and formed right at that period. Rice sorts grown in Japan have higher glutiness while boiling.

Rice is the most popular food in Japan. The Japanese eat rice in small portions two or three times a day and season it with no dressing at all.

Rice is a very important and wholesome meal. Statistics says that the Japanese suffer from cardiovascular diseases less than Europeans. Experts explain the astonishing result with the fact that they eat much rice.

It is known that the Japanese also attach much importance to the way a table is laid while eating. Indeed, Japanese dishes are astonishingly beautiful, delicate and natural at the same time. Japanese cooks concentrate not only on the cooking process but also create masterpieces of products in the kitchen.

In addition to the quality of food the Japanese also mind that portions must be reasonable. Unlike in the Russian cuisine with delicious and heavy meals Japanese meals are served in reasonable portions to avoid overeating. This explains why the Japanese seldom suffer from adiposity.

Eating the Japanese food is like tasting various products. It is known that a regular meal of aristocrats in medieval Japan consisted of at least ten different courses. Today, the Japanese also prefer to serve their meals with small portions of varied dishes.

Sushi, the traditional Japanese snack known worldwide is a combination of raw filleted fish (sometimes it may be smoked fish), seafood, vegetables and rice wrapped in seaweeds.

Sushi first appeared in South Asia and not long ago was brought to Japan by migrants and warriors. However, sushi has become an essential part of the thousand-year Japanese cuisine and one of the favorite snacks among the Japanese. In Japan, sushi is a regular meal while in Russia it is still considered exotic. Sushi is an incredibly healthy meal. Rice contains cellulose that is essential for digestion, protein, iron and complex carbohydrates. Seafood is even more low-calorie food than chicken meat. It is rich with B-group vitamins, iodine, zinc, potassium and phosphorous. Nori, the seaweed in which the rolls are wrapped is the source of three minerals essential for bones and blood vascular system – iodine, iron and potassium.