World leaders agree: We must close the gender gap 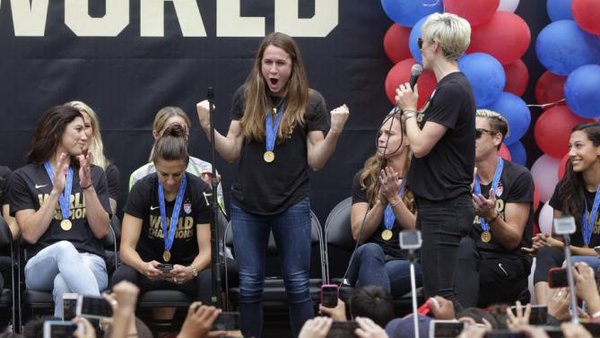 New York - Today, some 80 world leaders are convening at the United Nations to personally commit to ending discrimination against women by 2030 and announce concrete and measurable actions to kick-start rapid change in their countries. The event marks a historic first, with pledges delivered by Heads of State and Government. No other single issue is to receive this level of political attention at the UN Summit held from 25-27 September to adopt Agenda 2030 and its Sustainable Development Goals.

The People's Republic of China, host of the 1995 Fourth World Conference on Women, and UN Women are co-hosting the "Global Leaders' Meeting on Gender Equality and Women's Empowerment: A Commitment to Action."

Commitments are expected to cover a range of issues addressing the most pressing barriers for women, such as increasing investment in gender equality, reaching parity for women at all levels of decision-making, eliminating discriminatory legislation, and addressing social norms that perpetuate discrimination and violence against women.

Xi Jinping, President of the People's Republic of China, opened the event. He said "we still have a long way to go in achieving gender equality. ... The international community should reaffirm the spirit of the Beijing Conference with renewed commitment and pledge greater efforts to promote gender equality and women's all-around development. ... China will do more to enhance gender equality as its basic State policy, give play to women's important role as 'half of the sky' and support them in realizing their own dreams and aspirations in both career and life. The Chinese women, through their own development, will also play a greater part in the global women's movement and make greater contributions to gender equality in the world."

President Xi Jinping announced that to support women's development worldwide and the work of UN Women, China will contribute USD 10 million for the implementation of the Beijing Declaration and Platform for Action and the realization of the related goals in the post-2015 development agenda. President Xi further said China will support women and girls in other developing countries by providing health care, vocational training, financing for education and other assistance.

In his opening remarks, UN Secretary-General Ban Ki-moon directly addressed the assembled world leaders, saying: "As Heads of State and Government you have the power and the responsibility to ensure that gender equality is-and remains-a national priority." He continued to outline three areas for action: "First, I urge you to create and energetically implement coherent gender equality policies. Second, provide significant financing for gender equality so that commitments become reality. And third, monitor progress so that all governments will hold themselves and each other accountable for the pledges made here today."

"The highest leaders in the land are taking personal responsibility for their commitment to gender equality and the empowerment of women," emphasized UN Under-Secretary-General and UN Women Executive Director Phumzile Mlambo-Ngcuka. "Now the world looks up to them to lead the game-changing actions that secure and sustain implementation. Today we take the first firm steps towards 25 September, 2030."

Women for peace and development

As the first world leader to speak at the principal segment, German Chancellor Angela Merkel said: "We need women for peace, we need women for development. This is what we emphasized at this year's G7 Summit with our commitment to women's empowerment and initiative to provide vocational training and entrepreneurial opportunities for women in developing countries. ... In Germany ... we have expanded child care and we finally have a law on women in leadership positions. ... We all committed in 1995 to implement the Beijing Platform for Action. Now we are making a new commitment with Sustainable Development Goal 5. Commitments are good. Action is better. Let us take action!"

While actions announced will vary, they are expected to align behind a common message: The Sustainable Development Goals cannot be achieved without gender equality. If countries act immediately to translate the goals into action, and close many remaining gaps in implementing the landmark 1995 Beijing Platform for Action, the world could reach gender equality by 2030.

All government commitments are being posted throughout the course of the event at:http://beijing20.unwomen.org/en/step-it-up/commitments

The Heads of State and Government of Chile, Croatia, Iceland, Kenya and Mexico are co-chairing the event. Denmark, Kenya and Mexico hosted three World Conferences on Women that took place before the 1995 Beijing Conference. Besides government representatives, participants include champions of gender equality from civil society, the business world and multilateral organizations.

The Global Leaders' Meeting is the culmination of an 18-month long journey, spearheaded by UN Women, to review the status of implementation of the Beijing Platform for Action on its 20th anniversary. A record 167 countries undertook national reviews that assessed progress and gaps as a basis for new national actions plans to accelerate achievement of women's empowerment and gender equality.