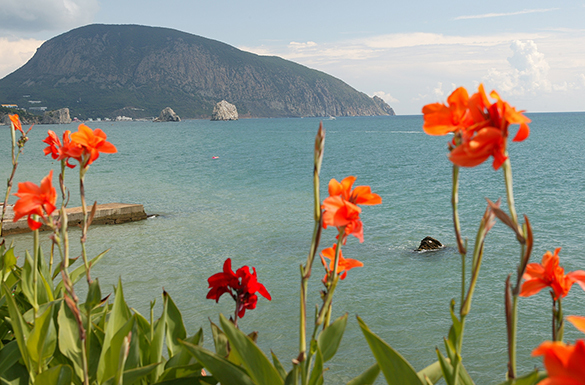 The Crimea peninsula has been inhabited by various tribal groups over the past millennium. Indigenous inhabitants were typically displaced either through peaceful infiltration or military conquest, by the arrival of a new tribe. Military conquest often results in brutal expulsion or extermination of the indigenous population. In the mid-10th century CE, Crimea was brought briefly under the control of the Kievan Rus' principality. However, over the next 200 years, the control of Crimea was "lost" to successive invading tribes from Central East Asia. The evolutionary spreading of the Kievan Rus' culture was then confined essentially to territories above the northwestern reaches of the Dnepr River. From early 16th Century CE to late 18th Century CE, Crimea was ruled largely as a tributary principality of the Ottoman Empire. Substantial arrival of the Slavic people began when Crimea was annexed officially by Russia in 1783, as the political power of the Ottoman Empire started to fade irreversibly. At that time, the differentiation of Ukrainian ethnicity and Russian ethnicity has yet to be fully formed. After the 1917 Russian Revolution, Crimea was governed variously as an oblast of Russia, an autonomous republic inside the USSR, and an autonomous republic inside the Russian Soviet Federative Socialist Republic (RSFSR). Because of its strategic military importance, Sevastopol located in the southwestern region of the Crimean peninsula had always been organized as a separate governing entity since its founding as a military outpost in 1783. Interestingly, Sevastopol (as well as the entire Crimean peninsula) was subject to several invasions and occupation by expeditionary military forces from western Europe under various casus belli since the mid-19thCentury CE, viz., in 1853-1856 (the vainglorious "Charge of the Light Brigade") led by Britain and France to contest the influence of the Romanov Empire in the Black Sea region, in 1918-1920 led again by Britain and France to destroy the newly-established Bolshevik Russia, and in 1941-1944 by the Third Reich to advance its Lebensraum ideology.

In 1954, CPSU First Secretary Nikita Khrushchev successfully engineered the transfer of administrative control of Crimea and Sevastopol from the RSFSR to the Ukrainian Soviet Socialist Republic. In this undertaking, Khrushchev may have had an insane moment of frivolous expression of "best friend forever", or a nefarious design for the consolidation of personal political power. The exact status of Sevastopol was never fully clarified in the transfer as there was no sign then that the USSR would ever end to cause a future intractable dispute of its ownership. At the time of the transfer, majority of the citizens of Crimea (as well as Sevastopol) was Russian speakers. After the demise of the USSR in 1991, there was significant growing sentiment in the Autonomous Republic of Crimea (within the new Ukraine) for separation to form a new independent polity or to unite with the Russia Federation.

The separatist unrest finally reached a climax during early 2014 when the Ukrainian Presidency of Viktor Yanukovych was overthrown by escalating street mob violence in Kiev. Substantiated evidence is now emerging that this coup d'etat was fostered by the NATO-EU Axis in its broader plan of military encirclement of Russia. The earlier idée fixe of NATO dedicating to the destruction of communism has transmuted into one aiming to achieve full-spectrum global hegemony for privileged corporate commerce. President Yanukovych was wavering in the way of this geopolitical design. The seemingly unruly masses in Kiev were enticed aggressively with promises of guided democracy and bountiful EU largesse. The official reason for the ouster was (and still is) that President Yanukovych was ineffective and exceedingly corrupt. But in a cursory analysis, Yanukovych was probably no worst and no better than any of his predecessors in the presidential office; they all had failed Ukraine miserably.

Interestingly, support of aggressive anti-Russia policies of the newly installed regime suddenly emerged among many members of the existing Verkhovna Rada, immediately after the departure of President Yanukovych. There was obviously an opportunity for these members to get rich quickly with inflowing cash transfer from the NATO-EU Axis. Although the fateful plan to abrogate traditional Russian culture and language rights throughout Ukraine was never pursued by the newly-installed Kiev regime, the announcement of intent was sufficient to invigorate the simmering separatist mood in Crimea and Sevastopol.

It has been reported recently (see, for example, here and here) in the news media that President Putin had met with his national security advisors during the final days of the Yanukovych regime to assess the appropriate feasible course of defensive action. For correct alignment with prevailing domestic politics, many foreign news media have purposely chosen to insinuate that the Putin meeting confirmed the existence of a long-standing sinister Russian plot to reunite with Crimea. It is generally recognized that such a deliberation is very normal during time of national crisis, for a government anywhere in the World. Like most other countries, Russia probably has many contingency action plans in archival storage for decades. Mock war games have always been the favourite pursuit of military planners everywhere. The substantial apprehension of the majority Russian-speaking Crimean population had provided the real-time reason to consider a plan to return Crimea and Sevastopol to Russia immediately. The subsequent referendum in Crimea and Sevastopol confirms the overwhelming popular support for reunification with Russia.

Equally important for Russia was the fate of the vast Sevastopol naval base of its Black Sea fleet after the coup d'etat in Kiev. It may be noted that since 1991, the divided physical assets of the Black Sea fleet as well as the naval base have been used jointly and without significant animosity by both Russia and Ukraine.  Although the extension of the lease of the Sevastopol naval base to Russia to 2042 was ratified by the Verkhovna Rada in 2010, Russia was placed in a very precarious strategic position with the sudden fall of the Yanukovych Presidency. This long-term lease could be annulled unilaterally and abruptly by a new anti-Russian ruling regime in Kiev, with the veiled threat of military enforcement by the NATO-EU Axis. In essence, Russia could be evicted summarily without recourse from its leased Sevastopol naval base. Previously agreed international laws, treaties, contracts and obligations have no practical standing in realpolitiks. Replacement of the Sevastopol naval base at another Black Sea location would have been very costly and lengthy for Russia. As a critical element of its strategic defence against encirclement, Russia could never relinquish its control of the leased Sevastopol naval base, even under direct military threat. It follows logically that a pre-emptive rapid move to return Crimea as well as Sevastopol to Russia was the only course of action available to President Putin. The correct presidential order was to deploy all means for achieving this goal expeditiously. Until the February, 2014 coup d'etat in Kiev, there was no opportunity, and there was no motive for "annexing" Crimea and Sevastopol.

What if Russia had not acted decisively to recover Crimea and Sevastopol, in view of the evolving conditions of increasing political uncertainties in Kiev? The near-term goal of the Axis would still be the eviction of Russia from the Sevastopol naval base. Periodic military harassments and skirmishes would surely be instigated within the Sevastopol naval base. As Ukraine is not an official member of NATO or the EU, the unbridled use of unsuspecting Ukrainian conscripts as cannon fodder for these adventurous activities would be considered low risk by the leadership of the Axis. This calculation is of course absurd as there is definitely a great danger that these inadvertent incidents could degenerate into a wider pan-European war. Indeed the preposterous belief of a Russian military invasion of Ukraine could suddenly become reality through a series of "accidental" provocations in the environment of increasing bellicosity of the Axis. Recall how the march to World War I could not be stopped by political regimes of all sides under similar circumstances during the summer of 1914. The outcome was the tragic loss of many millions of young lives needlessly in the ensuing 4-year war of attrition. With Crimea and Sevastopol returned fully to Russia, there are now much less opportunities for the Ukrainian proxy for mischievous provocations.

In retrospect, if the Yanukoych regime had not been ousted summarily and if the bellicosity of the assembled Kievan mob-like masses had not been so virulent, Crimea and Sevastopol might have remained integral parts of Ukraine today, albeit with their continuing "suppressible" agitation for independence. What has gone awry was the over-reaching of the latest expeditionary adventure of the Axis to unleash rabid anti-Russia sentiment which has been harbouring among a small ultra-nationalistic segment of the Ukrainian population. In a desperate attempt to salvage its considerable cash investment in the misadventure, the Axis is even contemplating an escalation of the already mutually-destructive economic war against Russia. It is stubborn madness.

In time, the return of Crimea and Sevastopol to Russia with little or no loss of human lives could be viewed positively by historians as a fortuitous event in which a quasi-proxy shooting war was averted. President Putin had saved Russia and Europe.