Nikita Khrushchev: The triumph and disappointment 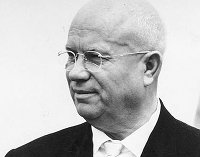 Nikita Khrushchev died 40 years ago, on September 11, 1971. Sputnik, Gagarin, the 1st Moscow International Film Festival, Khryshchev-era apartments built instead of barracks and multifamily accommodations, maize - all of those things are strongly associated with Nikita Khrushchev.

Perhaps one of his biggest achievements is the exposure of Stalin's personality cult, which went down in history as the "Khrushchev Report." They say that the sprouts of freedom that started to grow in the Soviet Union during Khrushchev's era, gave their fruits during the 1990s, under Yeltsin. However, as it can be seen from countless jokes, the people did not like Khrushchev.

People used to joke during Khrushchev's era: "If communism reigns in the world, where are we going to buy crops?" Any good initiative would be realized chaotically, without rhyme or reason, which would always create a mess. It would then end either with a confusing situation at best or with another national tragedy at the worst. Khrushchev's shocking therapy caused significant psychological damage to the people of the world's largest nation. The spiritual wounds were healed only in many years of Leonid Brezhnev's era of stagnation.

The people gradually forgot famine and the financial reform of 1961, which sent the prices on essential foodstuffs up by over 50%. Many Russians would only snort at this, because we have seen worse during Yeltsin's stay in power. However, the families of six million Russian people, who were abandoned in Kazakhstan after the collapse of the Soviet Union, still remember the Semipalatinsk nuclear test ground and maize - the "Queen of all fields."

On February 25, 1956, Khrushchev delivered his historical Secret Speech. As soon as Khrushchev came to power, he asked the secretary of the Central Committee of the Communist Party, Comrade Pospelov, to prepare a report about Stalin's personality cult. The report, Khrushchev said, was supposed to paint Stalin black as much as possible, so that he would be portrayed as a tyrant and talentless politician and commander, who won the war against Hitler's Germany by miracle. Pospelov was trying to add something positive about Stalin in the report, but Khrushchev did not accept anything.

The Secret Speech changed the world. The USA, England and the FRG were applauding Khrushchev. However, the members of the 20th Congress of the Communist Party did not discuss the report. They listened to the speech in breathless silence. Experienced politicians knew that Stalin was a giant, whereas Khrushchev was just a pygmy, who was trying to varnish his own reputation by laying the blame for the failure of the Kharkov Operation in the spring of 1942 and the defeat of 20 divisions of the Red Army on Stalin.  Some Soviet politicians believed that the people would not believe Khrushchev and would lose confidence in the Communist Party.  The Central Committee published the document on June 30, 1956, in which the Secret Speech was called a "step back."

Nevertheless, the years of the Thaw started. The Supreme Court of the USSR ordered to release Alexander Solzhenitsyn, who was highly honored during Boris Yeltsin's years.

In 1954, over 468,000 people were staying in camps, colonies and jails, over 63,000 were serving their sentences in deportation. However, less than three percent of those people were rehabilitated under Khrushchev. The remaining 97 percent were convicted again.

In 1962, people would line up for potatoes and bread at night. There was no bread or butter in food stores at all. On June 1, it was said that the prices on meat and dairy products would be raised nationwide by 25-35 percent. In the city of Novocherkassk, the workers of the major locomotive-making enterprise were ordered to work more for less money. Over 6,000 workers gathered for a meeting chanting "Khrushchev for meat", "Nikita, give us milk, meat and salaries back!" In the morning of June 2, a crowd of people headed to the municipal party committee. The people did not even think that soldiers would open fire at them. As a result, 16 protesters were killed, over 40 were injured, including children.

The events in Hungary that took the side of Nazi Germany during WWII, marked the first and fatal defeat in the Cold War for the USSR. Matyas Rakosi, the General Secretary of the Hungarian Communist Party, returned to Budapest from Moscow after the XX Congress of the Communist Party of the Soviet Union and said that Khrushchev would soon be declared a traitor. However, it just so happened that it was Rakosi, who was forced to resign. He was called a "Stalinist" and a "murderer." In July 1956, Rakosi moved to the USSR, where he later died. On October 6, 300,000 people took to the streets demanding the withdrawal of Soviet troops from the country. The protesters formed armed groups - the "fighters for freedom."

On October 22, the demonstrators demanded the establishment of the new government with Imre Nagy at the head. On October 23, Nagy became the prime minister and called upon the protesters to lay down their arms. Soon afterwards, the Soviet troops were withdrawn from Budapest and deployed in the area of the Budapest airdrome.

On November 4, at 5 a.m., Khrushchev ordered to open artillery fire on the Hungarian capital. Nearly 2,500 Hungarians and 700 Soviet soldiers were killed. Khrushchev's image of a liberal politician was ruined; the USSR was entirely discredited even for true followers of Marxism and Leninism in Western Europe and the USA. That was the collapse of Nikita Khrushchev as a politician.

On February 14, 1954, Khrushchev delivered the Crimean peninsula to Ukraine as a token of eternal friendship between the Russian and the Ukrainian nations. From March 1, 1954, the Russian port of Sevastopol became subordinated to Kiev, instead of  Moscow.

"They bring grist to enemy's ill," Khrushchev said speaking about the faithful during the next party congress. He promised to show the last Soviet priest on TV in 1975 and said that the destruction of churches and mosques in the country should be accelerated.

During the 1960s, Soviet citizens, especially young people, would be expelled from the party and colleges for visiting temples and for resorting to such church services as baptism, church wedding and funerals. The Russian Orthodox Church became a state enemy on the anti-religious front. The bells of nearly all temples in the country stopped tolling for decades.