The Presidium of the Supreme Council of the Soviet Union passed the decree to hand over the Crimean region from the structure of the Russian Soviet Socialist Republic (SSR) to the Ukrainian SSR within the Soviet Union. Then-Soviet leader, Nikita Khrushchev, virtually gave Crimea away to Ukraine. 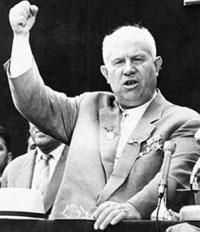 The delivery of the region from the Russian SSR to the Ukrainian SSR was just a formality during the years of the “indestructible” Soviet Union. Ukraine received such a gift on the occasion of the 300th anniversary since its unification with Russia. It could never occur to anyone back in those days that the USSR would collapse, and that Ukraine would no longer be a part of it.

Historians have a very simple explanation to Nikita Khrushchev’s generosity. He came to power after the death of Joseph Stalin, unmasked his cult and condemned repressions. However, Khrushchev was involved in a number of repression-related affairs before. He was conducting a struggle against “people’s enemies” when he served as the First Secretary of the Central Committee of the Ukrainian Communist Party from 1938 to 1947 to win the support of the Ukrainian leadership. That is why he gave the resort peninsula on the Black Sea coast to the republic.

The agenda of the session of the Presidium of the Central Committee of the Communist Party of the Soviet Union, which took place January 25, 1954, contained a question about the delivery of the Crimean region to the structure of the Ukrainian SSR. The discussion of the question took only 15 minutes. The participants of the meeting approved the decree, and the region was given away to Ukraine for free.

Not a single protest was made; no one had any doubts about the decision. No one wondered how the population (presumably the Russian-speaking population) of Crimea would treat the decision. It turned out that such important issues as the territorial movement of regions could be solved without any difficulties at all.

The question should have been submitted to the open discussion of the Supreme Council of the Russian SSR. Moreover, a referendum should have been conducted to find out the opinion of the residents of the two republics. Nothing of that happened. The Presidium of the Supreme Council gathered for a session on February 19, 1954 - only 13 of 27 members were present. There was no quorum, but the decision was adopted unanimously.

The Supreme Council of Russia ruled in 1992 that the Crimean region had been delivered to Ukraine illegitimately.

Now the region is called the Autonomous Republic of Crimea.