November 25 is the International Day chosen to highlight gender violence, a scourge described by the World Health Organization as a major health hazard, one which affects over a third of all women in all societies, all social classes, all continents, and one which is not diminishing. The horrifying statistics are a fitting comment on today's world. 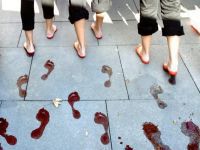 Around thirty-five per cent of all women have at one time in their lives, at least, or several times, experienced intimate partner violence or non-partner sexual violence. Thirty per cent of women who have been in any sort of relationship have experienced some form of physical or sexual violence committed by their partner. This violence can leave permanent physical, mental, sexual or reproductive health problems and sequels.

UN Commemoration of the International Day to End Violence against Women - Performance of Play: Wounded to Death

What:
Press Conference and official UN Commemoration of the International Day to End Violence against Women, 25 November

Why:
Violence against women and girls, a gross human rights violation, is a pandemic worldwide. One in three women is likely to face violence in her lifetime. Most violence takes place in intimate relationships, with up to 70 per cent of women reporting their husbands or partners as the perpetrator. In spite of significant progress in legislation and attitudinal shifts, violence against women is prevalent in all societies. Today 603 million women still live in countries where domestic violence is not a crime.

Background:
At UN Headquarters, the Italian Mission, UN Women and the Department of Public Information will co-host the commemoration of the International Day to End Violence against Women by presenting the play "Wounded to Death" by renowned Italian playwright Serena Dandini. "Wounded to Death" is a series of monologues that give voice to women who have died as a result of femicide (murder of women based on their gender). The enactments will be presented by women from the world of entertainment, art and civil society, including among others Italian actors Maria Grazia Cucinotta and Valeria Golino; photographer Nan Goldin and artist Marina Abramovic.
Staged originally in Palermo the play has been presented with great success around Italy, inspiring spontaneous performances from people in rural villages to groups in schools.