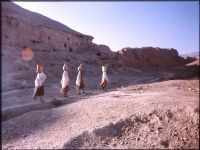 16 September 2013 - UN Women condemns the intimidation and targeted killings of Afghan women government officials and calls for justice. The latest victim is the top woman police officer in the southern province of Helmand who died today of bullet wounds from an insurgent attack that occurred yesterday. At age 38, Sub-Inspector Negar, had assumed duties in July when her predecessor, Islam Bibi, was shot by unknown gunmen.

In recent weeks and months, Afghanistan has witnessed several cases of intimidation, abduction and targeted killings of women government officials and public figures. Earlier in September, Sushmita Banerjee, a known writer and activist from India married to an Afghan businessman, was killed outside her home in Paktika province. In August, Friba Kakar, a woman parliamentarian was kidnapped and freed several weeks later in exchange for detained militants, according to the media. Last year two consecutive heads of the Department of Women's Affairs in Laghman province were killed. In 2008, gunmen in Kandahar killed Lieutenant-Colonel Malalai Kakar, the country's most prominent policewoman and head of Kandahar's department of crimes against women.

Recent cases of targeted killings point to the urgent need to guarantee women's and girls' rights as the Government of Afghanistan prepares for a full takeover from international forces and moves towards provincial and parliamentary elections. The empowerment of women and realization of their rights are fundamental to the reconstruction of Afghanistan so that women and men can take responsibility for the future development of their country.

Violence against women in Afghanistan is pervasive and increasing. More than 4,000 cases of violence against women and girls were reported by 33 provinces to the Ministry of Women Affairs in 2010-2012. Afghan women's rights to safety and security have to be ensured, and the survivors of violence supported and perpetrators brought to justice. UN Women calls upon the Afghan Government to fast-track the investigation and prosecution of perpetrators in targeted killing cases.

It is essential that the Government of Afghanistan and the international community stand by their commitments to improve access to justice for all, in particular women, by ensuring the Constitution and other fundamental laws are enforced and the Ending Violence against Women Law is implemented. It is also essential to support Afghan women's participation in important national institutions and processes, including the upcoming elections. It is only with women's participation that Afghanistan stands a strong chance of achieving sustainable peace and democracy.

UN Women is the UN organization dedicated to gender equality and the empowerment of women. A global champion for women and girls, UN Women was established to accelerate progress on meeting their needs worldwide. For more information, visit www.unwomen.org..