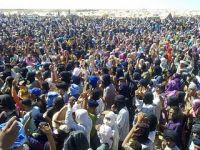 Western Sahara: On this day, a year ago, the first tent of the Dignity Camp in Gdeim Izik was erected. First a few dozen, followed by 400 and finally the tent city reached more than 8 000, which gave shelter to more than 20 000 people.

Meanwhile in cities like Boujdour, Smara and Dakhla, people also set up their tents on the outskirts of their occupied citiesn Laayoune. The Dignity Camp began as a symbol of complaint against the Moroccan occupation of Western Sahara, which was required after the plundering of natural resources and an end to social discrimination the Saharawi people by the Moroccan occupying regime.

It was, from the first tent to the last, from the first day until its destruction by the Moroccan government, a space of struggle, peaceful coexistence, to denounce the occupation and all that it entails, but above all a space of Freedom.

On this day the first pickaxe stuck in the arid and rocky terrain of Gdeim Izik was born a day like today, a most peaceful mass protest that the Saharawi people have lived in recent years. Today more than ever, we want to send a MESSAGE of encouragement and pride to every Saharawi who left home to settle in the wilderness and teach the world the strength and dignity of its people and their struggle.

And we want to send a desperate cry to the international community to remember that day like today, the Saharawi people began to give us a valuable lesson in unity and respect, perseverance and conviction to achieve their full rights, that a day like today began Camp Dignity, brutally destroyed 28 days later and still without clarifying the facts and reasons.
Where is the impartial investigation asking the UN and the Spanish Government what happened?

We take this moment to remember the current status of the occupied city of Laayoune, which remains heavily miltarizada, the military and police checkpoints throughout the city. No Motion for charm throughout the city, no Saharawi can move their cars on the road from Laayoune to Smara, the road passes near Gdeim Izik. Sahrawi people are not able to go to bring food and water, due to the refusal of the military.