Gaza: what the world forgot 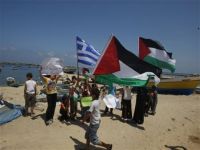 The massacre of Freedom Flotilla 1, by the army of Israel, which carried supplies to Gaza, happened a year ago. The world was shocked by the brutal action that killed 10 activists and injured hundreds. A UN Human Rights Council survey concluded that the Israeli army committed war crimes.

In the UN Security Council, the U.S. suggested that the very government of Tel Aviv should be able to investigate the incident. But it didn't go over well. The UN opted for "impartiality." Appointed to a commission were Turkish and Israeli representatives, plus a New Zealand jurist.

Strangely, however, Uribe, Colombia's former president and close ally of former President Bush, was added to the group. With this, of course, impartiality was compromised. What the commission has done is not public domain. We only know that, until now, it was marked by secrecy.

Influenced by the outcry of world public opinion, the Israeli government announced what they called an "easing of the blockade of Gaza," with some restrictions. The entry of construction materials remained banned (except when dealing with a project of the UN), parts, equipment and raw materials that could be used to make weapons, in addition to blocking the export of products, among other items.

Six months later the results were meager, according to Lady Catherine Ashton, Minister of Foreign Affairs of the European Community.

A joint report of the NGOs operating in the region came to the same findings, and Jeremy Hobbs, director of one of them, Oxfam International, stated that it served "only a fraction of the necessary aid to civilians trapped in Gaza by the blockade. The failure of Israel to fulfill its commitment and lack of international action to lift the blockade deprived the Palestinians of access to clean water, electricity, jobs and a peaceful future."

In fact, Israel has approved only 7% of the projects presented by the UN, which included 100 schools and health centers, to replace those destroyed during the invasion by Israel.  And most of this 7% listed requires building materials that are prohibited.

Thus, the reconstruction of 50,000 houses, 800 industrial units and 200 schools and health centers that were reduced to rubble by Israeli aircraft are now nothing but a mirage.

Unable to export, to rebuild industrial units and import most raw materials and equipment necessary, 2 / 3 of the factories cannot operate again.

As a result, industrial unemployment at present reaches actually 90%, and the number of unemployed in all sectors 40%. This dramatic picture is completed with 80% of the population living below the poverty line, half the 1.5 million inhabitants depend on UN rations to survive.

If they failed to alleviate the problems of blockade, the "Israeli concessions" functioned as an anesthesia for public opinion in other countries. Barack Obama and Tony Blair considered that the first step has been taken to solve the problem. The international media has virtually ignored Gaza, reporting only sporadic missile launches from there to Israel, and the predictable ensuing retaliatory strikes that Israeli aircraft carry out.

And so the world was forgetting Gaza. It forgot that the blockade was deemed illegal by the UN. They paid little attention to the complaints of people like Ilan Pappé, former professor of history at the University of Haifa, "Israel uses genocidal policies in Gaza." The lack of UN action was left to pass blankly, whose commission investigating the massacre of Freedom Flotilla I was paralyzed (as though we do not know why).

It is because of this forgetfulness that Freedom Flotilla 2 was ready to sail. Remember the tragedy in Gaza is far from over. The people there are still suffering a totally illegal and unjust blockade that has lasted five years. Humanity cannot continue allowing a city to be slowly strangled.

It is alleged that the recent reopening of the border with Egypt, with the new government, will solve the problem. But this isn't quite so. Export and import remains virtually impossible. By sea, the Israeli blockade still prohibits. By land, it also does not allow, since the connection with Egypt is through bridges unable to bear the weight of trucks carrying goods.

Without being able to import necessary materials for buildings and industries, there is no way to revive the economy and therefore jobs and conditions for a dignified life for the people of Gaza.

Freedom Flotilla 2 consists of 20 boats with 1,000 people from 20 different countries, including Israeli human rights activists. Among them, four Nobel Peace Prize winners and the American writer, Alice Walker, who thus justifies her participation: "... is to pay a debt to the Jewish civil rights activists, who faced death alongside blacks in the south, in our time of need. "

Israel has done everything to prevent the departure of Freedom Flotilla 2. They arranged for the governments of many countries to recommend that their citizens do not embark on this journey. None spoke of illegality, only risks, given the previous massacre.

In fact, it is illegal for Israel to repeat the approach and kidnapping of the boats and their passengers, because it only has jurisdiction within 12 nautical miles of its own territorial waters, which the flotilla would avoid.

In turn, the journey of Freedom Flotilla 2 is supposed to be fully guaranteed by UN decisions that, through resolution 1860, January 2009, provides that it cannot prevent "the distribution across Gaza of humanitarian assistance, including food, fuel and medical treatment."

Anticipating possible Israeli accusations (as they did in the case of Freedom 1) that they were carrying weapons, the organizers of the trip Freedom Flotilla 2 asked repeatedly that the Mediterranean countries and international organizations send observers to inspect the vessels, their cargoes and passengers.

No one answered of course. Israel did not find it necessary to repeat the mistake, the massacre, the piracy and kidnapping that lowered them considerably before world public opinion.

Instead, they managed to blackmail and put pressure on the flaccid, impotent, bankrupt government of Greece, which did not allow the ships to depart. They may never depart in this new climate of Israeli bullying.

The delay of the second Freedom Flotilla has failed to arouse the conscience of humanity. After delaying the second flotilla, Israel gets away with another outrage against humanitarian activists.

Israeli authorities have arrested 120 pro-Palestinian activists who arrived at Tel Aviv's Ben Gurion Airport on a peaceful mission. Israel had a blacklist of some 200 activists that they were determined to prevent from flying to Tel Aviv.

In a statement, the organizers of the flotilla campaign condemned the pressure that the Israelis put on airlines, saying the action demonstrates once again the restrictions on access to Palestinian areas. They have threatened legal action.

The Middle East Quartet of Mideast mediators -- the U.S., U.N., EU and Russia -- urged governments to discourage Gaza-bound flotillas that could escalate tension in the region. So much for the hypocritical, worthless "international community" eating table scraps thrown by the Empire for their immoral complicity in genocide and collective punishment.

A flotilla organizer noted that "ships are free to go to other locations" besides Gaza. This raised the possibility that organizers have debated whether their vessels could declare they are bound for another destination, and then turn toward Gaza once they are in international waters.