Festivities being held throughout the country 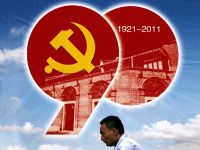 Founded on 1 July 1921, the Communist Party of China has prepared blockbuster festivities in several cities and major productions coming to cinemas in the coming days. Bookstores are filled with commemorative publications and museums were dressed in red, with evocative exhibitions.

In 61 years of government, in an alliance with eight other parties, it restored the prosperity and dignity of the Chinese, burying the period that went down in history as the "century of shame and humiliation," the pre-revolutionary time, in which the country was dominated by Western colonial powers.

On Thursday (30th), the Chinese government celebrated the anniversary with the inauguration of great infrastructure works, with two key projects for the national economy.

The first is the expected high-speed train linking Beijing and Shanghai. The second major work is the Haiwan bridge in the Bay of Qingdao, which, with 42.5 km of extension, becomes the world's longest bridge over the sea.

Although there is no official confirmation, it is expected that China will use this historic time to test in open waters the first aircraft carrier for its armed forces, increasing the prestige of the People's Liberation Army.

The anniversary also comes with almost 30 films telling the history of the CPC, some with Chinese international stars playing lead roles, such as Andy Lau and Chow Yun-fat, coming to theaters in the coming months, resulting in the postponement of most commercial Hollywood premieres.

The People's Daily said on Friday in an editorial that development in these 90 years of the Communist Party of China shows why the CPC has become the core leadership of the revolution, and the construction and reform of China.

The passing years "prove the ability to sustain the historical task of the Chinese people and nation, as well as to always maintain its invincible position in the dynamic national and international context. The CPC works to keep the Marxist characteristic alive, besides always developing intimate relations with the people," the newspaper said.

The editorial also reiterates that, faced with the complicated international situation and the arduous task of reform and development, the Communist Party of China should further strengthen the mission of serving the country and people as a priority guideline to assess and examine all government activities.

In a statement issued Thursday afternoon, the Communist Party of Brazil congratulated the Chinese Communists, giving emphasis to the birth of a "new China" after the victory in the 1949 Revolution, "whose three decades followed the necessary foundations for a new period of building socialism in China, with the beginning of the period of reform and openness."

"As an expression of its role as a vanguard force, is the third plenary session of the 11th Central Committee of the Communist Party of China in December 1978, which marked the beginning of a period of modernization in China. The foundations of the new period are the valuable contributions of Comrade Deng Xiaoping, who proposes to go to the fundamentals of Marxist socialism to identify the centrality of development of productive forces for the construction of a new society," the statement said.

Many politicians and international scholars this week praised the achievements of the CPC in the social construction of China.

The director of studies at the Far East Academy of Sciences of Russia, Mikhail Titarenko, noted that the concept of scientific development suggested by the CPC, pays attention to harmonious development, and the complex and sustainable progress of the society, which gained public confidence.

The President of the Institute of International Relations in Galicia, Spain, Xulio Rios, analyzed what frustrations Chinese society had gone through before the 80's of the last century, but the Communist Party of China sought new paths of positive development and always considered the development and revival of the country and raising the standard of living of the population as the main strategic goals, which brings benefit to the country and the citizens.