Ludmila Zykina, the People’s Artist of the USSR, died at age 80 of cardiac arrest in Moscow on July 1. The legendary Russian singer was hospitalized in severe condition on June 25. 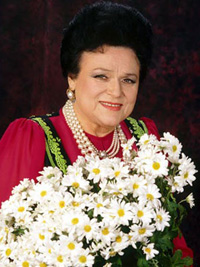 Zykina celebrated her 80th anniversary only three weeks ago. President Dmitry Medvedev personally congratulated the singer on the phone, while his wife, Svetlana Medvedev, organized a special evening for her in the Kremlin.

Ludmila Zykina is best known for her song “Volga.” She became known abroad as “Miss Volga” afterwards. The entire Soviet Union was proud of her voice. It would not be an exaggeration to say that Zykina’s voice became the national endowment of the country.

“We lost the voice and the soul of Russia. Her songs, the sound of her amazing voice, the lyrics and depth,” singer Zurab Sotkilava told Kultura TV Channel.

Ludmila Zykina became a symbol of the Russian music. Over 6 million of her records were sold in the Soviet Union . She was on stage for over 60 years.

Zykina was one of the few of the Soviet artists, who was allowed to tour in other countries of the world. Zykina became known abroad as the “Queen of Russian folk music” and the “Russian Edith Piaf.”

The singer visited America in 1960. The members of the legendary Beatles approached Zykina after one of her concerts.

“They sang a verse from one of my songs – that was all they knew – and gave me a small silver cross, for happiness,” Zykina told journalists.