There is no place for homosexuals in Orthodox Russia

The Bishops’ Council of the Russian Orthodox Church that will take place in Moscow on June 24-29 will need to express its strong protest against the so-called gay marriage, Archbishop Pheophan believes. 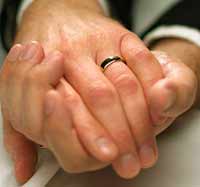 There is no place for homosexuals in Orthodox Russia

“They often ignore the most important aspects – the right of a human being bestowed on him by God not to corrupt individuality and society on the whole,” the archbishop said during a press conference in Moscow. He exemplified his point of view with so-called marriages concluded between representatives of sexual minorities, Interfax Religion reports.

“Same-sex marriage will never be acceptable from the point of view of the Orthodox and Christian point of view. This is a violation of the ethical and moral right bestowed on us by God, and we have to stand firmly for that,” the cleric said.

The Russian Orthodox Church has repeatedly said that same-sex marriages contradict to Christian norms, undermine the moral basis of the European civilization and cause irreparable damage to its spiritual influence in the world.

In December 2003, the Moscow Patriarchy suspended its relations with the US Episcopal Church when the latter ascended Gene Robinson, an open homosexual, to bishop.

There is evidence that same sex unions have occurred since the beginning of recorded history in Egypt, China, Greece, Rome and Japan. Famous lovers include the Egyptian couple Khnumhotep and Niankhkhnum and the Greek couple Harmodius and Aristogiton. The first recorded use of the word "marriage" for same-sex couples occurs during the Roman Empire. A number of marriages are recorded to have taken place during this period. The rise of Christianity changed attitudes to same-sex unions and led to the persecution of gays. In the year 342, the Christian emperors Constantius and Constans declared same-sex marriage to be illegal. In the year 390, the Christian emperors Valentinian II, Theodosius I and Arcadius declared homosexual sex to be illegal and those who were guilty of it were condemned to be publicly burned alive.

Marriage, as defined by the civil law, is currently available to same-sex couples in six countries. The Netherlands was the first country to allow same-sex marriage in 2001. Same-sex marriages are also legal in Belgium, Canada, Norway, South Africa and Spain, along with two states in the United States, Massachusetts and California. In June 2008, Norway became the first country in the world to recognize same-sex marriage on equal terms while at the same time allowing gays to adopt and receive artificial insemination on the same terms as heterosexuals.

Some disagree with the idea of government recognition of any marriages, arguing that the personal relationships of citizens are not a proper issue of governmental concern. This view is often expressed by those who see the only legal issues related to marriage involving the nature and extent of parties’ consent to the relationship. Proponents of this view argue that the parties should define almost all aspects of the relationship, in much the same way that parties to other types of contracts are generally free to define the terms of their agreement. Prenuptial and postnuptial agreements arise among those holding this view.

Others, including many gay rights advocates, assert that legal recognition of marriage is based upon the government's interest in encouraging stable, committed relationships. Stable relationships reduce the need for society (sometimes through government) to provide support for its members. Each spouse safeguards the other's well being by, at times, acting as a nurse, banker, policeman, etc. Examples include demanding the keys to the car when one or the other has had too much to drink, or staying home to care for the other after surgery, or paying debts owed by a husband or wife. Advocates for recognition of same-sex unions argue that there is no difference in the ability of same-sex and opposite-sex couples to make commitments and care for each other, and therefore the law of marriage should apply to both.

Some opponents object to same-sex marriage on purely religious grounds. Opponents often claim that extending marriage to same-sex couples will undercut the conventional purpose of marriage as interpreted by cultural, religious, sexual, and traditional understanding. Furthermore, opponents argue that same-sex marriage cannot fulfill common procreational roles, and/or sanctions a partnership that is centered around sexual acts that their respective religion prohibits. For example, James Dobson, in Marriage Under Fire and elsewhere, states that legalization or even tolerance of same-sex marriage would redefine the family, damage traditional family unions, and lead to an increase in the number of homosexual couples.

The Roman Catholic Church also opposes recognition of same-sex unions, arguing that acts of sexual intimacy are only proper between a man and a woman, and that the proper setting for those acts is only within marriage. Government inclusion of any other unions within the definition of "marriage" would reflect a belief in the moral equivalence of acts between a husband and wife and acts between two men or two women; this belief many find erroneous, in turn, would form the basis for public education requirements and legal enforcement of that view through laws restricting the actions of those who continue to believe that sexual acts between members of the same sex are not morally acceptable.