Organizers of the Moscow gay pride parade sent their second complaint against Russia to the European Court of Human Rights last week, claiming the compensation of one million euros. 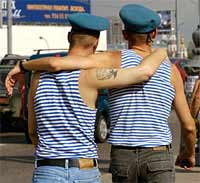 “I am absolutely certain of our final victory in Strasburg. The Russian authorities arbitrarily deprived us of the right guaranteed by both the Constitution of the Russian Federation and the European Convention (on Human Rights),” Nikolai Alexeyev, an organizer told Interfax.

On May 16, 2007 Moscow authorities banned to organize another gay parade in Russia’s capital. In the autumn of 2007, a regional court together with the Moscow State Court acknowledged this decision as legal, which made the organizers appeal to the European Court of Human Rights.

In May of 2007, the Moscow police arrested gay rights activists, when they tried to deliver a letter to Moscow mayor Yuri Luzhkov, in which they asked him to allow a gay pride parade. A German parliamentarian, Volker Beck, Marko Kapatto, an Italian from the European Parliament and British activist Peter Tatchell were a few of the detainees.

They were arrested after they had confronted their outspoken opponents, such as Russian nationalists, young communists and representatives of Orthodox organizations, who beat them and threw eggs at them yelling “Moscow is not Sodom.”

Apart from foreigners, they arrested Nikolai Alexeyev, an organizer of the gay parade, an activist with GayRussia organization. Marko Kapatto was beaten up when he called the police. About 40 people were arrested in total.

The Strasburg Court has already received a complaint from the representatives of Russian sex minorities, who opposed the prohibition to organize the first Moscow gay pride parade in May of 2006.

Dmitry Bartenev, the lawyer of the parade organizers, asked the European Court in his letter to combine in one procedure the two complaints against the prohibition of the first and second gay parades. In connection with that Alexeyev said that no country-member of the Council of Europe was ever liable at same time for two cases of banning gay parades at the European Court.

As to the amount of the claimed compensation, Alexeyev said that he could hardly name the price for all the sufferings caused by the prohibition of parades and permanent oppression from the Moscow and Russian authorities.

“Anyway, we will use the compensation for the development of the LGBT movement [lesbians, gays, bisexuals and transsexuals] in Russia,” Alexeyev argued.

Russian sex minorities are going to make the third attempt to organize a gay pride parade in Moscow on May 31, 2008 to mark the 15th anniversary of the day when the criminal prosecution for homosexual relations was canceled in Russia.