The daughters of Russia's richest men are trying to make their names on almost everything - fashion industry, pop music, television and publishing. They always succeed because they always enjoy the support of their incredibly wealthy fathers. 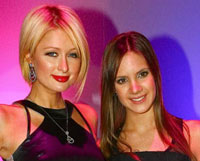 Fourteen-year-old fashion designer Kira Plastinina is among such girls. Her father Sergei is worth an estimated 700 million dollars.

Unsurprisingly, in a country where one in four people still lives below the poverty line, such extravagance causes deep resentment.

And whereas America took 200 years to produce the likes of Paris Hilton, the Russian equivalents have emerged only 16 years after the fall of the Soviet Union, The Daily Mail reports.

Father: Valentin Yumashev, a journalist who become Boris Yeltsin's chief-of-staff and is now a London-based consultant.

Polina was educated at top private school Millfield and in 2001 wed aluminium baron Oleg Deripaska, worth $16 billion, in Russia's wedding of the century.

The couple have two children. Polina has her own business, which has been aided by not only her father but her husband.

Father: Vladimir Potanin, the publisher of the Russian edition of Cosmopolitan whose $14 billion fortune makes him the world's 38th richest person.

Anastasia is a former Russian champion in the extreme sport of aquabiking but retired from the pastime after breaking her leg and is now looking for a career in sports management. She should do well – her father is behind Russia's successful bid for the 2014 Winter Olympics in Sochi.

Anastasia is a keen skier, unsurprisingly given that her father built an indoor slope at his $14 million Moscow home.

Father: Vasiliy Anisimov made his money in aluminium in the Nineties. He now has a $2 billion fortune and is a business partner of Arsenal shareholder Alisher Usmanov.

Anna once paid $520,000 to rent a house in America for the summer. Since then, she has snapped up a $5 million Miami penthouse as well as a New York apartment, for which her father paid $15 million.

Her private yacht is frequently seen off Sardinia. She came to America after her father's business made it too dangerous to stay in Russia. She is being groomed to take over his empire.

Father: Ralif Safin, founder of Russian oil giant Lukoil. He is now a politician with an estimated $700 million fortune.

Safin, 53, was determined that his children would become famous and has poured money into helping the career of his daughter, known as the 'Russian Britney'.

Alsou says: 'Any parent would help his child. I know that envious people keep calling me “a singing petrol station”.' As a wedding present, Safin gave his daughter and her new husband a Moscow penthouse and a huge dacha outside the city.

Father: Sergei Plastinin is president and a major shareholder of food giant Wimm-Bill-Dann and worth $700 million.

Described as 'the youngest designer in the world', Kira launched her own clothing label in March, thanks to a $100 million investment by her father.

'I usually draw sketches during maths lessons,' she said.

Even Paris Hilton, pictured with Kira top left last week, is impressed with her work and said: 'The fashion show was amazing. I am wearing her linen right now.'

Daria is as much at home in Moscow as at Stamford Bridge with her boyfriend, Chelsea owner Roman Abramovich.

When she first came on the scene, Daria was wrongly depicted as a model or a student.

In fact, she's a businesswoman in her own right, running upmarket clothing brand Kova&T with old school friend Kristina Tang, daughter of billionaire David Tang. Their jeans are favoured by many stars. Daria's former boyfriend is tennis player Marat Safin.

The presenter of Russian reality TV show, Home 2, Kseniya is known as Moscow's Paris Hilton and no party in the capital is complete without her.

Kseniya, who has dated a string of millionaires, makes no apology for her lifestyle: 'I've got a kind of level below which I would never go, therefore my circle of friends consists only of wealthy people.'

She also has little time for those who are jealous of her privileged life: 'It's understandable, especially in Russia where there are a lot of poor people.'