The dreaded Ebola virus, one of the most horrific and deadly in the world, has reared its head again in West Africa, this time in Guinea Conakri, having also possibly spread to neighbouring countries. In The Republic of Guinea, there have been 86 cases and 62 deaths, a fatality rate of 70%. 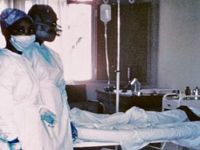 The outbreak of Ebola hemorrhagic fever has been evolving rapidly in the forests of South-Eastern Republic of Guinea. The neighbouring countries have been placed on alert, after possible suspected cases have been identified in Liberia and Sierra Leone. Guinea-Bissau, Mali, Ivory Coast, Senegal and Gambia have been placed on alert to check possible infected people crossing their borders.

Rene Lamah, the Minister of Health of the Republic of Guinea, states that bats appear to be one of the main suspected causes of the outbreak of the deadly disease and therefore the sale of these animals has been prohibited. Bats, especially dried bats, are a delicacy in the area. They are either stewed in chilli sauce or else slow-cooked over an open fire until they are dried, then they are consumed with alcohol.

The Ebola fever virus is named after the river Ebola in the Republic of Zaire (now DR Congo) where it was discovered in 1976. It is transmitted by contact with the skin, body fluids or meat of infected persons or animals. A common source of infection in some parts of Africa is when people place their hands on the deceased person at funerals.

The incubation period is between two to twenty-one days, after which the temperature rises sharply. The patient feels an intense tiredness, muscular pains, headaches, sore throat and then vomiting, diarrhea, a rash on the skin, dehydration, kidney and liver failure and massive internal and external hemorrhage. Patients suddenly start bleeding from the nose, ears, anus, mouth, penis or vagina, eyes or even skin.

There is as yet no vaccine or treatment for this disease. In Europe, the Portuguese health authorities have alerted the medicinal services for possible entrance into the country from Guinea Bissau.