The eternal problem of bullying 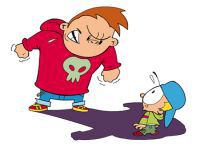 In Webster's dictionary, the definition is clear: bullying is to treat abusively, by means of force or coercion. It is therefore necessary that the perpetrator is someone or a group of people with physical or mental superiority who abuse the victim intentionally, and repetitively. One should differentiate bullying from harassment, in which physical superiority is not necessary. Coercion has a clear purpose, usually for a sexual advantage.

Another different situation is cyber bullying, in which there is no physical contact. In general, the victim does not identify the attacker, the abuse does not occur in real time and the victim enters the virtual space of their own volition. In cyber bullying, there are other approaches.

The exaggerations in the use of the term bullying as a cause of antisocial behavior are harmful because they can cover up other serious psychopathies or those who require different treatment altogether. Today, bullying seems to be the favorite excuse of those with psychopathic personalities, as well as those who have a behavior that is in limbo, between normal and pathological.

In early April, at a conference on the subject held at the White House and sponsored by Obama, the U.S. president declared that he had been the victim of bullying. Can you imagine the effect of this if bullying really has a crucial role in creating killers? Not every murder is because the criminal was beaten by a parent or suffered at the hands of colleagues.

The problem of bullying continues. More common among children, it is mostly a case of physical superiority of the aggressor and a victim suffering from low self-esteem. It seems a hot current topic, but the term was already used in the seventeenth century. And who does not remember Big John who was hitting everyone in the class for no reason?

According to Dr. Guillermo Bigliani, an expert in the area, 63% of Brazilian workers are victims of bullying, especially black women. Bullying is serious, because it demonstrates a lack of intervention from someone more powerful than the aggressor to protect the victim.

In Britain's post-crisis, 54% of youth are involved in bullying, and a third of children are victims or involved in attacks on others. In capitalist cultures, most bullying is tolerated and more frequently practiced in situations of poverty.

In early civilizations, bullying was promptly restrained by an intervenor that was always around children and would not tolerate violations. Although not written, the law was embedded in the automatic behavior of people. Today, everything is on paper, but nobody seems to read it.

Now, a four year old child who talks with a classmate in class goes to an isolation chair, while a 16 year old can break the face of his colleague in the classroom and the teacher, for fear of being attacked, pretends not to see. This is the real problem: the punishment of what is appropriate behavior and the tolerance of an intervenor to antisocial behavior that promotes bullying.

Bullying does not only occur among children. A very didactic discussion on the topic from three specialists, including Dr. Bigliami, was turned into a book to be published later this year under the title Shame and Humiliation, Systemic Psychoanalytic Dialogue, and will have to have a place in a teacher's head. The book exposes how our society, modern and chaotic, allows the rise of a bullyboy or bullygirl in the state or the high management positions in business, causing depression, anxiety and even suicide among the victims.

Dr. Young Shin Kim of Yale University (USA), analyzed 37 studies from 13 countries and noted that victims of bullying have up to nine times more suicidal thoughts than individuals who have not suffered such abuse. For her, those who suffer from bullying may not be as subject to the risk of becoming a murderer, but they certainly are a potential suicide.