Human heart has only split seconds to rest

The world-known heart shape has nothing in common with the real shape of the human heart. History does not have the name of the person who was the first to draw a heart shape. It is only known that people use this symbol for hundreds of years. One of the versions says that the heart shape has its roots in the playing cards. 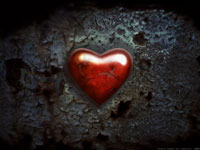 Human heart has only split seconds to rest

The shape of the human heart bears some resemblance to an egg, with its top aiming leftward, downward and forward. This ‘egg’ is slightly squeezed in the back of its lower part, where the heart rests against the diaphragm. The shape of the upper part of the heart is rather hard to explain due to the complicated system of large blood vessels coming in and out of the heart.

It is generally believed that the heart sits in the left half of the thorax. This is not quite correct. The heart mostly sits in the middle of it, with the top of the heart slightly offset to the left because of the natural inclination of the organ. There are exceptions from this rule: some people have the mirrored positioning of the heart when the top is offset to the right. This anatomical peculiarity, known as dextrocardia, usually appears along with the mirrored positioning of all other internal organs. It occurs with less than one of 10,000 people.

The blood circulation occurs as a result of rhythmical contractions of the heart – the beating. The heart produces contractions and relaxations of its muscles - the systoles and diastoles.

Starting in the right atrium, the blood flows through the tricuspid valve to the right ventricle. Here it is pumped out the pulmonary semilunar valve and travels through the pulmonary artery to the lungs. From there, blood flows back through the pulmonary vein to the left atrium. It then travels through the mitral valve to the left ventricle, from where it is pumped through the aortic semilunar valve to the aorta. The aorta forks, and the blood is divided between major arteries which supply the upper and lower body. The blood travels in the arteries to the smaller arterioles, then finally to the tiny capillaries which feed each cell. The (relatively) deoxygenated blood then travels to the venules, which coalesce into veins, then to the inferior and superior venae cavae and finally back to the right atrium where the process began.

All heart compartments are separated from both each other and blood vessels with muscle valves, which let the blood travel in one direction only. The condition at which the blood leaks through the closed valves is known as congenital or acquired valvular diseases.

The rhythmical heartbeat occurs owing to the electrical conduction system of the heart. The fibers, which cover the surface of the heart, generate electric impulses. The impulses are generated by the sinoatrial node of the heart, which triggers the contractions of the atriums and then reaches the ventricles. The activity of the electrical conduction system of the heart can be observed with the help of the ECG, or electrocardiogram, which shows how the heart generates the impulses and if there are any abnormalities in the process.

Devascularization, or interruption of blood circulation results in death of the whole organism, that is why the heart has to work non-stop. The heart can rest only during diastoles, when the heart muscles relax for a moment before the next contraction.

If blood circulation is interrupted for 15 or more minutes, the ‘hungry’ part of the heart dies. It results in the production of a blood clot, which blocks a blood vessel and triggers the myocardial infarction.

If the heart stops beating, paramedics take lifesaving efforts to stimulate the electrical conduction system of the heart. A strong electrical impulse makes all fibers of the heart tissue contract synchronically.