Dubai's state-owned investment company, Dubai World, bought a piece of Las Vegas on Wednesday, announcing an investment of US$5 billion in MGM Mirage. 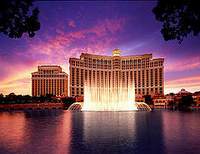 Dubai World, the investment firm in this fast-growing Persian Gulf emirate, will pay US$2.7 billion to purchase a 50 percent stake in CityCenter, a 76-acre urban metropolis with upscale hotels, condos and retail to open by 2009.

Dubai World will also buy 14 million shares from MGM Mirage at a price of US$84 per share.

"The announcement today brings together two companies known for creating landmark developments that have the ability to change the face of luxury living and tourism," said Sultan Ahmed bin Sulayem, Chairman of Dubai World.

"Our vision is to create a global portfolio of signature properties that will create value for generations to come," Bin Sulayem said.

Dubai World became known in America when its subsidiary, Dubai Ports World, last year was forced to sell its U.S. port operations over security concerns in the United States.

The company is a powerful engine for this city-state's economic growth. It holds a collection of companies in the Emirates, the Gulf and abroad, including in the U.S., UK and South Africa as well as ports in China, Peru and Australia.