Personal bodyguards become all the rage in Russian cities

A good personal bodyguard is an analyst, a psychologist who has the ability to read between the lines

The profession of guarding somebody's precious body has existed from time immemorial. Egyptian pharaohs and Persian kings had a small force of specially trained soldiers who were ready to die while protecting their masters. Oprichniki or life-guardsmen looked after Ivan the Terrible. Cossacks provided security to the Romanovs dynasty. The 9th Directorate of the KGB was in charge of security services for the members of the Political Bureau (Politburo) in late Soviet times. The directorate had 5,000 men to guard 24 important statesmen. The number of personnel of the present day Russian secret service – the Federal Security Service – is not so high but the number of very important persons has shrunk too. Private security agencies were booming in Rostov in 1992-1993 following the Law “On private detective and security services.” 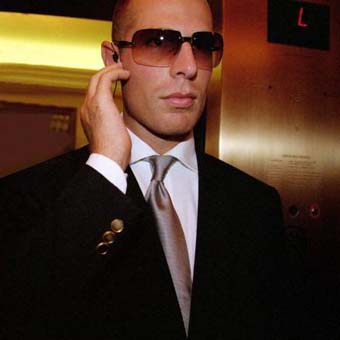 It is thought that a bodyguard should meet the following requirements: a huge build, an expert in martial arts, firearms and knives.

“Physical training and a strong physique of a personal bodyguard do matter but the above requirements are not crucial,” says Vyacheslav Martynyuk, a director general of the first and largest center of Southern Russia for upgrade training of personal bodyguards.

In actuality, the perpetrators normally avoid shootouts and fistfights with the bodyguards. First and foremost, a good personal bodyguard is an analyst, a psychologist who has the ability to read between the lines and anticipate the behavior and intentions of certain individuals.

“Here is a composite image of a bodyguard: a male, 28-29 years of age; height is about 190 cm so that he can use his frame as a shied if need be; an ideal weight should be below 90 kilograms because a bodyguard has to spend most of his work time walking or running due to the nature of his job,” says Mr. Martynyuk.

Being a bodyguard is rather a way of life than an occupation. Being an analyst and psychologist is not enough, he should continuously improve his professional level in order to be up to the job. Any skills will rust away unless they are kept fresh by a regular training. Every reaction should become automatic. On the other hand, this work does not imply “standard” situation.”

“As a rule, those who decided to become bodyguards  simply because “they look so cool” in action movies, quit sooner or later. Some just drop out without finishing a course in the training school,” say Viktor, a personal bodyguard (last name withheld by request). “Those who stay on board will normally stay forever,” says he.

According to Viktor, many bodyguards have problems with regard to their personallifeandhealth. They could spend a few hours with a family or simply take a nap once they have some free time. Instead, they have to analyze information about a client during those scarce hours of free time. “I worked for a number of clients including top businessmen and high-level bureaucrats. Many of them hire personal bodyguards mostly for show,” says Viktor.

A personal bodyguard's work schedule completely depends on the occupation of a client. Some bosses stay in all day without moving too much about the town. Others are always on the move, and they usually go to a sauna or a restaurant in the evening, not to mention a visit to a lover or a brothel.

According to Viktor, bodyguards form their own “attitude” to the outside world. They keep off noisy recreational activities. Some guys can not relax even among friends. For example, they can “monitor the situation” while partying etc.

According to Mr. Martynyuk, demand for drivers/bodyguards has been  growing in Russia recently. Businessmen spend at least half of their working day in a car and therefore they need a driver who is not just good at driving but can also protect them in an emergency situation. It is a lot more difficult to work as a driver/bodyguard than a personal bodyguard. His duties are many. He is responsible for technical maintenance and safety of a vehicle; should draw up the main route and at least three auxiliary routes, should be aware of road sections in need of repair, should know a traffic light pattern and congestion times on the particular sections of the road. Mr. Martynyk says there are three basic rules a driver/bodyguard should always follow: speed, safety, and comfort. It does not, however, mean that top speed is always justified. Learning how to keep the distance in the right way is more important. It is essential for maneuvering or keeping an unauthorized vehicle from cutting in a motorcade.

As by contract, a client must follow every piece of instruction given by his bodyguard. A security agency reserves the right to terminate the contract unilaterally should a client fail to follow the recommendations. Many a clients simply can not understand that the bodyguard is not an errands boy, he should not carry luggage or go to a store for a packet of cigarettes and so on. A personal bodyguard's hands should be free.

There are a couple of good recipes for those who are gong to hire personal bodyguards. First, the cost of security services is high but it is worth the money spent. According to Mr. Martynyuk, the cost of security services of a personal bodyguard starts from $1,000 in Moscow and St. Petersburg. Second, hire real professionals who can build a complex system of personal security.