It was even before Christ that Greeks took a keen interest in the culture and history of people living on the banks of the Nile River. In 1848, one of numerous archeological expeditions working in Egypt discovered strange hieroglyphs at the height of about ten meters right above the entrance to the Seti Temple in Abydos. The walls were  covered with the strange signs that greatly puzzled researchers. The only thing the researchers realized at once was that they had discovered some images of strange mechanisms that nobody ever saw before. 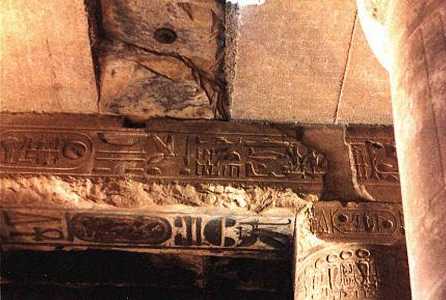 It is still unknown what exactly an artist living about 3,gu000 years ago engraved on the walls. The archeological expedition carefully copied the mysterious signs on the temple walls, and the hieroglyphs gave rise to endless disputes and heated debates among Egyptologists. As a result, majority of Egyptologists arrived at a conclusion that there were just four strange objects drawn in different variations. Unfortunately, researchers of the 19th century failed to understand what ancient Egyptians actually drew on the temple walls. Like any sensation the mysterious Abydos hieroglyphs were absolutely forgotten some time later.

In about 150 years, the respectable Arab newspaper Al-Sharq Al-Awsat published several sensational photos taken in the Amon Ra Temple in Karnak. At that, the newspaper asked its readers whether they believed that ancient Egyptians knew about battle aviation. The question would have seriously puzzled readers under some different conditions. But the photos the newspaper published demonstrated the bas-reliefs of an ancient temple built under Seti I who ruled 3,000 years ago; and on the bas-reliefs an ancient artist engraved a battle helicopter with a distinct rotor and a tail unit. Nearby, the artist depicted several other aircrafts astonishingly resembling contemporary supersonic fighters and heavy strategic bombers!

After the sensational publication of the photos it became clear why Egyptologists of the 19th century could not tell what was depicted on the walls of the temple in Abydos. Indeed, the researchers did not know how helicopters and aircrafts look.

Pharaoh Seti I was always known as the most famous and successful regents in Ancient Egypt who actively expanded his estates and had to repulse attacks of enemies. Do the published sensational pictures mean that the Pharaoh even employed battle aviation to fight enemies?

Well-known Egyptologist Alan Alford left to the Nile banks to study the Abydos mystery. The researcher studied the mysterious hieroglyphs and made sure that what seemed absolutely incredible was in fact quite real. Alford told journalists that ancient Egyptians had depicted a real helicopter model as if they made the engravings from life.

So, researchers got two almost identical sets of drawings from Karnak and Abydos which seemed be not accidental at all. Skeptics recollected that “Bee” was one of the names of Pharaoh Seti I and stated that the mysterious drawings were in fact attempts of an ancient artist to draw a bee. They would not believe that Egyptians might know about helicopters.

At the same time, world-famous ufologist Richard Hogland declared that the mysterious drawings just proved his theory saying Egyptians descended from Martians who had once visited this planet. The researcher explains that Martians chose Ancient Egypt for landing because of its landscape wonderfully resembling the Martian one.

But the ufologist failed to explain the origin of a submarine which was also engraved nearby the battle helicopter on the walls of the temple in Abydos. And the drawing was incredibly detailed. And researchers had to confess they were still too far from solving the mystery of the hieroglyphs and the frescos. It is perfectly clear that there are no seas on Mars, and the drawings of a submarine thus could not be made by “descendants of Martians” as Hogland called Egyptians as they had no notion what a submarine may be.

In the past years of the 20th century, many of Mars researchers actively supported Hogland's theory. They believedthatfailures of automated interplanetary space stations to land on Mars were closely connected with the mysterious hieroglyphs discovered on the walls of ancient temples. The researchers stated that millions of years ago a unique anti-missile shield was created around Mars for safe protection from curious and aggressive unwanted guests. When ufologists are told that some automated vehicles actually landed Mars and even took photos revealing there is no civilization on the planet, they say that terrestrials will be able to see only what Martians want and let us know about them.

Famous Egyptologist Bruce Rowles gives another interesting hypothesis about the origin of the strange hieroglyphs. He says there were no interplanetary expeditions from other star systems to this planet in the old times. He supposes that Egyptian pagan priests knew many of nature secrets. It is a proven fact that 3,000 years ago Egyptians made the first batteries and generated electricity. Bruce Rowles also supposes that pagan priests in Ancient Egypt could look to the future where they quite probably saw battle helicopters, aircrafts and submarines. But Rowles' hypothesis is as unstable as the theory of Hogland.

Today, the disputes about the mysterious hieroglyphs are still heated. Some researchers believe that Egyptians knew aeronautics secrets and could fly but later the secrets were lost. But others insist that enthusiasts are too imaginative if they see modern helicopters, aircrafts and submarines in Egyptian engravings and bas-reliefs. Let us forget the heated disputes and see what history says on the issue.

Popular scientific literature says that Egyptian Pharaoh Tutankhamen died 3,300 years ago as a result of an air crash. Historian William Deutch made the sensational statement and also said that ancient Egyptians could go up to the clouds with balloons inflated with hot air and with primitive gliders. Such flights were available for the royal family and nobility only. Deutch says that many of the royal family in Ancient Egypt including Tutankhamun himself died with their legs broken and numerous wounds as if they tragically died as a result of an aircraft crash. The researcher is sure that strange objects depicted in discovered ancient engravings and drawings were in fact the first flying devices. Deutch even made many models of such aircrafts and found out that many of them could soar in the air. William Deutch says that aeronautics first appeared in Egypt and then spread to the territories currently known as Tibet, India, Mexico, Turkey, China and Guatemala, in other words those territories where air flows could hold aircrafts in the skies.

An elegant 4-centimeter item which was obviously used as an amulet or a pendant made not later than the first millennium B.C. is known as “the Columbia gold airplane”. As of today, researchers have found 33 items of the type on the territories of Columbia, Peru, Costa Rica and Venezuela. All of them are different on the outside but have the same principle of airplane construction with the horizontal and vertical keel empennage. Ancient artists often made them look like creatures covered with scales and with glowing eyes. But biologists of the world admit that the gold items cannot be identified with any known creature of fossil or contemporary fauna on the planet.

Contemporary aerotechnics experts believe that “the gold airplane” might be a model of an aerospace aircraft with an opening cockpit; a model of a freight aircraft for landing water for one-time use only and even a model of a sub-aquaplane. But in fact, experts could discern an airplane in the gold model long ago.

In 1956, “the gold airplane” was among exhibits of the Pre-Columbian Gold exhibition in Metropolitan Museum of Art, New York. The deltoid wing and the vertical plane of the tail unit atypical of birds drew attention of American aircraft designers. The directors of the exhibition allowed testing the ancient “aircraft” in a wind tunnel. It turned out that the gold model could soar at supersonic speed, the issue which was widely studied in that epoch. The ancient model helped aircraft designers of Lockheed create a supersonic plane, the world's best for that period.