The presentation of the monument to a stray dog, which is going to be installed at one of the stations of the Moscow metro took place in Russia's capital today, in the Darwin Museum. 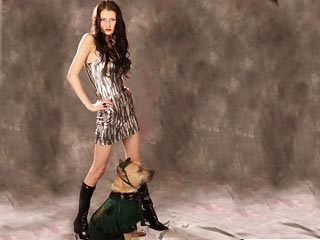 The monument, tiled “Sympathy” will be placed on the site, where a 22-year-old model, Yuliana Romanova, publicly stabbed a dog named Malchik (Boy) more than four years ago.

Malchik was a black mongrel dog, the size of a police dog (pictures). The animal was living quite happily in that area: owners of flower and tobacco shops and employees of the metro station would always bring some food to the dog.

The dog killer came from a common Russian family: the 22-year-old girl Yulia Romanova was a top model. According to eyewitnesses, the girl was walking along the subway with her Staffordshire terrier. The girl was looking quite glamorous: she was wearing a hat made of black velvet, a blue fur-trimmed coat, a short skirt and tall boots.

Very unexpectedly, the girl started setting her terrier on Malchik that was sleeping there in the subway. As her dog was getting more and more furious, the girl decided to take part in the fight as well. Romanova pulled a knife out of her purse and stabbed the mongrel dog six times in his back, chest and stomach. The dog died several minutes later.

The horrible incident of human brutality received an extensive coverage in the Russian media. “It was really the talk of the day back then. A group of artists decided to address to the administration of the Moscow metro to support the idea of placing a monument to the killed dog near the station. The monument would symbolize a protest against human cruelty,” the chairwoman of the center for 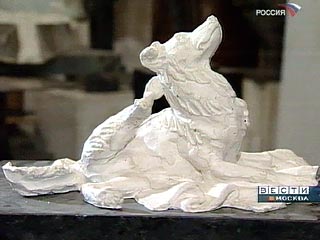 protection of animal rights, Irina Novozhilova, told Interfax. A lot of well-known Russian actors and public figures joined their efforts to establish a special council for the project, which was eventually entitled “Sympathy.”

The work resulted in the creation of a monument, which was made with the help of the money donated from both Russian and foreign citizens.

The monument has been presented in the Darwin Museum of Moscow today; the pedestal of the monument is not ready yet. Irina Novozhilova said that the monument to the killed stray dog would have a huge ethical significance. “The question of respect to the world of animals that live next to us is like the first stage of morality, which one cannot skip in order to proceed to all further stages,” the woman said.

20:01
Ammo depot with rockets for 50 HIMARS systems destroyed
17:30
American Marine: Pro-Russian ideas are spreading among US mercenaries in Ukraine
17:16
Woman killed by train while staying inside wooden toilet cabin
16:56
War correspondent: Kyiv switches to the tactics of duct tape and toilet paper
16:30
Ukrainian General: This isn't Call of Duty –– US warehouses are empty
16:21
British MP explains how Russian FM Lavrov outplayed Boris Johnson
15:48
Kyiv Mayor Vitali Klitschko divorces his wife Natalia after 26 years of marriage
20:57
Video shows moment of Salman Rushdie attack
19:16
Russia will face serious sanctions as USA will not recognise Donbass referendum
18:57
USA successfully empty European armouries having supplied all weapons to Kyiv
World
The Guardian reveals when the West will stab Ukraine in the back