One Belt, One Road, but not for India and Japan

Economic forum "One Belt, One Road" has finished working in Beijing. The forum attracted the leaders of 29 countries. This was enough to assess the forum as a success of the Chinese foreign policy. Interestingly, India and Japan did not send their representatives for the forum in China. Does it mean that these two large Asian powers do not intend to take part in Chinese projects? 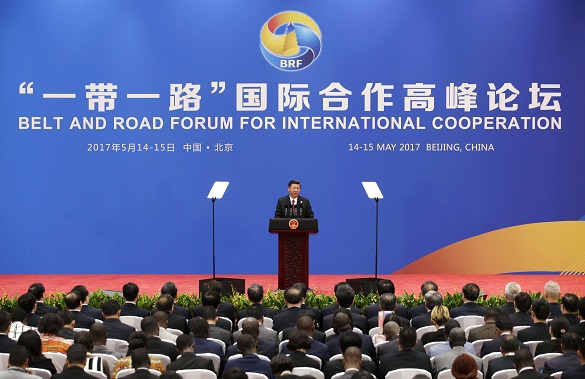 It would seem that the non-participation of India and Japan in the above-mentioned forum does not seem to be a big problem. Yet, there is still a problem about it.

"One Belt, One Road" is a Eurasian project that does not relate to the USA. Yet, India and Japan are two major Asian powers, without which the Chinese economic forum may become a big failure.

This is especially true for India. After all, Japan depends on the USA - its economy and trade target the USA in the first place, whereas Eurasian horizons are secondary for Japan.

India is in a different story. This is a full-fledged Eurasian power, the economy of which grows at a rapid pace. For India, it would seem, any chance to expand access to world markets is priceless, given the fact that "One Belt, One Road" involves the creation of a fundamentally important corridor from China to the Indian Ocean. This is not going to be just another transport artery: a whole axis of development will inevitably be created along this corridor to give a powerful impetus to industry and agriculture.

The work in this direction is already under way: the Chinese have built the deepwater port of Gwadar on the Pakistani coast. India could join this wonderful opportunity to receive a part of its profit from it.

The fact is that New Delhi sees the Chinese project as a direct threat to India.

The Indians do not want to tolerate the fact that China ignores their unsettled territorial dispute with Pakistan over Kashmir. Those arteries that lead to Gwadar in the south are supposed to pass through disputed lands now under the control of Islamabad, but for India, this is an illegally occupied territory.

If Beijing recognized the Indian jurisdiction over those territories, New Delhi would gladly join the project. China is unlikely to do it, because in this case, the Chinese will have to fight with Islamabad and lose the Gwadar port.

This port, let alone its commercial purpose, will also serve as a naval base for China to let the Chinese control the situation in the Indian Ocean. China will thus be able to monitor oil routes across the Red Sea and show resistance to the Indian Navy. It just so happens that the Sino-Pakistani economic corridor is in fact an instrument to ensure China's strategic interests in the Indian Ocean and South Asia region. Therefore, it poses a potential and a very big threat to India.

India in turn has launched the implementation of its own, alternative North-South transport corridor project through the territory of Iran, on the coast of which India currently builds the port of Chabahar.

One may expect an aggravation of relations in India-Pakistan-China triangle.