The global system of trade and economic relations is undergoing fundamental changes. The illusion of the unified "world market" is being replaced with structures that are currently being formed around oceans. The projects of Trans-Pacific and Trans-Atlantic partnerships are going through various stages of implementation. In the basin of the Arctic Ocean, the Arctic macro-region is being formed. 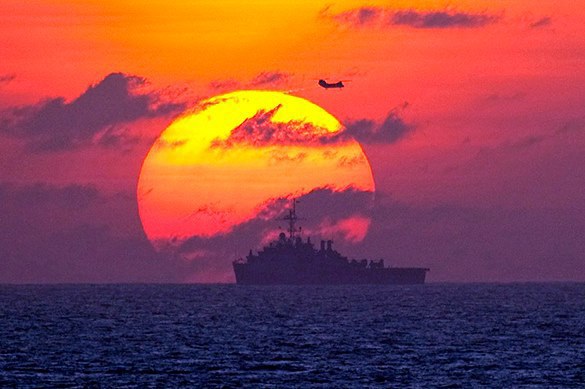 The region of the Indian Ocean will apparently be the next step. In comparison with other three oceans, the Indian Ocean has a number of peculiar features. For example, this is the only ocean, to which global players - the United States, Europe, Russia and China - have no access to. Therefore, for each of these powers it is crucial to ensure their military presence in the region.

The United States has its Fifth Fleet there along with strategic bases: Bahrain in the Persian Gulf and Djibouti at the entrance to the Bab-el-Mandebsy Strait - the gateway to the Red Sea.

Europe can "reach out" to the region with the help of NATO. There are agreements on cooperation netween NATO and the Gulf States, where the British are particularly active. London, for instance, has obtained permission to build a base in Oman, at the exit from the Persian Gulf.

The French retain their positions in Djibouti. France also controls Reunion and Kerguelen Islands in central and southern parts of the Indian Ocean.

It should be noted that the need for non-regional players in strong naval presence in the Indian Ocean has appeared because of the activity of Somali pirates. To ensure the safety of merchant vessels, many countries sent their ship to East Africa, and the fight for the possibility of establishing a long-term base in the region has not stopped since then.

The Chinese have proved to be most resourceful at this point. China has obtained access to the NATO-US base in Djibouti and ports in Mozambique. Beijing has been building up its presence in East Africa; for example, in Sudan, Ethiopia and in other states. The Chinese have already created their own infrastructure, the scale of which they will show at the right time. This brings up an episode from April 2015, when foreigners were fleeing the war-torn Yemen. During the time of the crisis, the Chinese landed their commandos in the port of Aden and evacuated all Chinese citizens without any warnings at all.

The most valuable "pearl" in the necklace of Chinese bases in the Indian Ocean is Gwadar- a port on the coast of Pakistan. In Gwadar, the Chinese intend to build not only a strategic naval base, but a large commercial port that will be connected with the People's Republic of China by direct rail and road communication.

The implementation of the Gwadar project is the starting point of the new era in the history of development of the Indian Ocean against the backdrop of growing rivalry between China and India.

The joint Sino-Pakistani project is a direct challenge to India - the country that has always considered the Indian Ocean its own ocean. China's ground access to its waters and the appearance of a Chinese base in the region comes as a threat to Delhi.

The base at Gwadar will give Beijing an opportunity to take control of sea routes from Asia Pacific to the Middle East and Europe - a dream that India has cherished for long. In this case, China will become the only strategic partner of the United States not only in the Pacific but also in the Indian Oceans, pushing India to a secondary position.

India responded by strengthening military cooperation with the United States (India goes together with Vietnam here, as Vietnam also wants to be friends with the USA to counter China. At the same time, Delhi started building up cooperation with Iran, where a similar, Gwadar-like port is to be built. The project in Iran is known as the Port of Chabahar.

This project is purely an economic one. The port is to give access to the Arabian Sea for Afghanistan and the former Soviet Asian republics. There is little doubt that the project has a military and strategic constituent. At least, it is clear that its implementation will increase competition between the blocks of Delhi-Tehran and Islamabad-Beijing.

Washington will try to interfere by manipulating the unclear picture about the abolition of sanctions against Iran, involving external players such as Saudi Arabia and manipulating such issues as arms supplies, anti-terrorist struggle and human rights protection.

Most importantly, both Gwadar and Chabahar are located on the territory of Baluchistan, which can be called the "Kurdistan of South Asia." The Baloch is one of the divided peoples living in Pakistan, Iran and Afghanistan. In 1948, upon the proclamation of independence of the former British India, the Baloch had not received the desired independence, and have been struggling for self-determination since then.

The fact that the above-mentioned economic and military objects re being created on their territory serves as a first class trump card for the United States.

As we can see, there is a serious conflict of interests brewing in the Indian Ocean with the participation of nuclear powers (China, India, Pakistan) and the "circumnuclear" Iran. The United States claims for leadership in the macro region with NATO's support.

Under these conditions, Russia may develop cooperation with India, Pakistan and Iran to build a security system in the Persian Gulf. Yet, this is not enough for a large-scale game. The loss of Soviet bases in Yemen (Aden, Socotra), Mozambique and Somalia has not been compensated for yet.