The official ruble rate may slide down following the results of yesterday's meeting between Russian President Putin and Minister for Economic Development Maxim Oreshkin. Putin held the meeting with the minister due to the recent strengthening of the ruble rate. 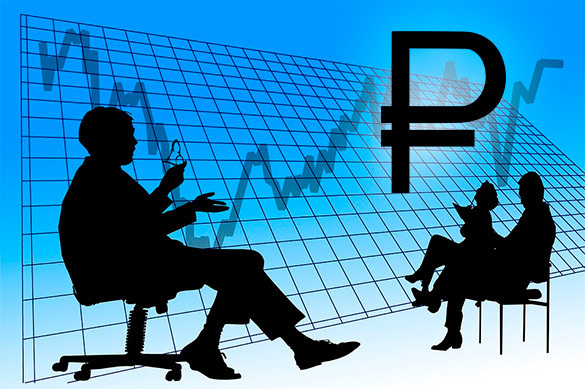 Professor of Finance University, Boris Heifetz, said in an interview with the Rossiyskaya Gazeta that the ruble would have most likely fallen even if the meeting had not been conducted, because the Russian currency had been rising in value for too long already.

According to the professor, the Russian currency has been strengthening against the backdrop of carry-trade currency sales. One may also assume that there could be a third reason involved: someone could be playing against the Russian ruble, although the probability for that is low (only about 1-2 percent).

According to Heifetz, the Russian ruble may now slide again for several reasons. "The rate of the national currency based on budgeted oil prices is higher. The stronger the ruble gets, the larger the hole in the budget will be. Secondly, the competitive ability of the Russian industry is lower when the ruble is strong, and Russian exporters receive lower income. Thirdly, the trade balance, as well as the balance of payments worsens as imports grow, the professor believes.

The Russian Finance Ministry has made a decision to purchase foreign currency, but the purchase volume has proved to be insufficient.

On February 14, 2017, the rate of the Russian ruble hit the highest level since 2015. The unusual strengthening of the national currency, which occurred contrary to all fundamental principles, has raised concerns in the Finance Ministry and attracted attention of the Kremlin. The ruble was supposed to lose value against the backdrop of the purchase of currency.

According to economists' estimates, the volume of currency sales now reaches 10-12 billion dollars a day, which considerably exceeds daily purchases of currency by the Finance Ministry - about $100 million. Experts are puzzled as they can not explain the unusual activity of the ruble.

The head of the Ministry for Agriculture of the Russian Federation, Alexander Tkachev, negatively assessed the strengthening of the ruble against the dollar. In his opinion, it will affect the export potential of Russia.

Director of ALЁNKA CAPITAL project, Elvis Marlamov, told Pravda.Ru that the devaluation of the Russian ruble was not likely to happen.

"I think that the devaluation of the ruble in the coming months is unlikely. The budget deficit will be covered by borrowings. Russia can borrow risk-free for a long time, because we have a very low level of public debt relative to GDP," the expert told Pravda.Ru.