Roscosmos is to send a person to the Moon

The Russian Space Agency (Roscosmos) has prepared a program to develop a spacecraft launch facility with a price tag of 800-900 billion rubles. The proposal was submitted to the Government of the Russian Federation. If it is approved, the project of the Space Agency will become a federal program for the period of 2016-2025. Among other things, it provides for sending a person to the moon. 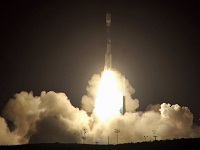 Roskosmos based its concept of the federal program on two scenarios, a favorable, "basic" one, and unfavorable, "crisis" one. Which one of them is implemented would depend on the relations between Russia with Kazakhstan, Izvestia reported.

The difficulties in the relations between the two countries over the operation of the cosmodrome "Baikonur" emerged after Kazakhstan became independent. Officially, "Baikonur" is located on the territory of Kazakhstan in Kyzyl-Orda region between the town of Kazalinsk and the village Dzhusaly. However, the operations were carried out by Russia. At the moment the Russian Federation has a long-term lease on the facility, which costs the Russian budget 5 billion rubles annually (total maintenance of "Baikonur" costs Russia 6.16 billion rubles a year).

The lease term expires in 2050, but Kazakhstan already has plans for the use of "Baikonur." According to its representatives, the lease agreement of 1994 is obsolete. In 2010 the president of a subsidiary Kazkosmos stated that Kazakhstan considered it possible to begin independent maintenance of "Baikonur" by Kazakhstan in 2014. However, for the Russian side a situation where local experts leave Baikonur before 2020 is unthinkable. This has to do with the fact that the launch facility "East" currently under construction in the Russian Federation as a replacement for "Baikonur" will not be ready.

Currently there is a Russian-Kazakh intergovernmental commission on the complex "Baikonur" chaired by First Deputy Prime Minister Igor Shuvalov. The relations between the two countries on this issue are quite unstable. This is precisely why Roscosmos provided two scenarios for the project. If the relations are stable, the cost of the federal target program will be approximately 800 billion rubles. In the event of difficulties in the relations between the two countries, the cost of the program will grow to 900 billion rubles.

Under implementation of the "basic" scenario, there will be further investment in "Baikonur." There are plans to complete the conversion of the launch complex for carriers "Zenith" 2018 to enable running a new manned spacecraft currently created by RSC "Energia". At the same time, the Federal Space Agency expects to carry out construction of the cosmodrome "East." In particular, it is planned to create a launch site for super-heavy rockets that will bring loads weighing up to 70 tons to the low Earth orbit. The ultimate goal of creating such a missile is to make manned flight to the Moon as early as in 2028. In addition, the Federal Space Agency also intends to invest in the development of the cosmodrome "Plesetsk".
.

If Russia fails to negotiate an amicable agreement with Kazakhstan, the programs at the "Baikonur" will have to be wrapped up and implemented with the help of two other existing cosmodromes. This would be more expensive because the investments in "Baikonur" have already been made, and with the other cosmodromes Russia will have to start from scratch.

Incidentally, last week, the Federal Space Agency introduced to the Government a bill proposing the extension of its functions under the framework of a single structure "State Corporation Roskosmos." Roskosmos wants to take charge of the development of the national policy in the space sector, prepare their own federal laws, sign government contracts, and place state orders for development, manufacturing and supply of space technology. In addition, they want to regulate the funding of the industry independently. This means that the agency, becoming a state corporation, wants to determine how much money the state should be allocating for its needs.

"Roskosmos" is planning to complete the reforms in two years at the cost of approximately 125 million rubles. However, later "Roskosmos" plans to increase both profitability of the aerospace industry and the quality of its products.