EU and illegal deals in Morocco 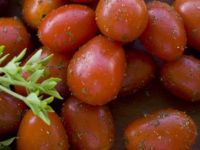 The report 'Conflict Tomatoes' (attached) reveals massive growth in the Moroccan agriculture industry in occupied Western Sahara and its trade to the EU. The report will be published on 14 February 2012.

Most probably on 16 February 2012, the European Parliament will vote in plenary over a new agreement for further liberalisation of agricultural products from Morocco. The agreement fails, however, to specify that production of Western Sahara must be excluded from the deal. The consequence could be a massive support to unethical and controversial industry in the territory.

The report identifies 11 plantations situated around the town of Dakhla in the southern parts of the territory. The research shows that all sites were either owned by the Moroccan king, powerful Moroccan conglomerates or by French multinational firms. No firms are owned by the local Saharawi and not even by small-scale Moroccan settlers in the territory.

All this industry is based on extraction of non-renewable water basins located deep underground. The industry is taking place without the consent of the people of Western Sahara, and is thus in violation of international law, as described by a key UN legal opinion.

"The people who work on these farms are Moroccans, not Saharawi. They work on the farms for months on end, and live in government sponsored housing programmes. Meanwhile, the Saharawi population in Dakhla remains unemployed", stated Dakhla resident, El Mami Amar Salem, president of the Committee Against Torture in Western Sahara, in the report.

The agricultural production of the farms has shown a tremendous boost: the vegetable produce increased by 2800% between 2002-2003 and 2008-2009. The number of people working in agriculture in the Dakhla region is expected to triple by 2020.

Farmer associations in southern Europe have expressed their concern that they will now have to compete with plantation firms operating in the occupied territory.

"We recommend the EU institutions to not conclude an agriculture agreement with Morocco without specifying that it does not apply to produce from Western Sahara. Doing otherwise, will undermine international law, fail to respect the Saharawi people's most fundamental rights and negatively interfere with the UN peace talks", stated the organisations behind the report.

The report is published by the international organisation Western Sahara Resource Watch and Emmaus Stockholm from Sweden.

On 14 December 2011, the EU Parliament stopped the EU fisheries in occupied Western Sahara - mostly due to a concern over breach of international law.