Russia refuses from T-90 tanks and sells them to Africa

A large batch of Russian T-90 tanks that received appraisal from Vladimir Putin and criticism from the officials of the General Staff, will be delivered to North Africa. The Russian tanks will arrive in Algeria - the country that borders on Tunisia and Libya. It appears, though, that the Russian army does not need new tanks. Defense ministry officials say that the ministry would not be making any orders for armor in the near future. 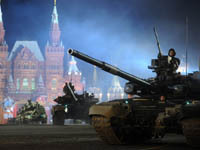 In 2009, Russia's defense export giant Rosoboronexport completed the delivery of 185 T-90C tanks to Algeria. However, the recent events in the region, which have already resulted in the toppling of political regimes in three different states, has made the country take care of its own defense. Thus, in the fall of 2011, Algeria signed another contract with Russia for the delivery of 120 brand new Russian tanks, the Vedomosti newspaper wrote with reference to its sources at Rosoboronexport and Russian Technologies.

The T-90 tank is not the only export item of the Russian defense industry in the new contract. The arms agreement, which Algeria has signed with Russia, is reportedly evaluated at $1 billion. The tank makes only a half of the contract. In 2011, the tank was evaluated at 118 million rubles, which means that 120 tanks cost a bit more than $470 million.

The T-90C modernized tank produced a positive impression on the head of the Russian government. Putin had a chance to see the tank during an arms show in the city of Nizhny Tagil in the fall of 2011. Putin sat in the tank turret and praised the designers for introducing "long arms." The modernized version of the tank is capable of striking targets in the radius of up to 5 kilometers. "This is a very important aspect. This is what the Defense Ministry has always been complaining of," Putin said.

However, Nikolai Makarov, the Chief of the General Staff of the Russian Armed Forces, ripped to pieces the statement from defense industry officials a couple of days ago. The officials said that the T-90 tank was one of the best tanks in the world. Makarov claimed that the tank could meet only a certain part of requirements of the Defense Ministry. The vehicle had many drawbacks, Makarov said. The general believes that Uralvagonzavod, which makes the T-90, could only make a good tank turret.

It is not the first time, when T-90 becomes an object of criticism. Alexander Postnikov, the Commander of the Russian Ground Forces, stated in March 201 that the tank was too expensive for the budget. Russia could instead purchase German Leopards for the same money, Postnikov said. In November 2010, the Russian tank did not withstand comparison with Israel's Merkava tanks. Nikolai Makarov stated that the destruction system of the Russian tank was not good enough.

In 2011, the Russian Defense Ministry stopped purchasing T-90 tanks. It was not only about the claims to the combat qualities of the tank, experts said. The price was the main problem. The Russian army has many T-72 tanks. It is possible to modernize those tanks to the T-90 level, and the process will eventually be 3-4 times cheaper. The maker of T-90, Uralvagonzavod, already has a three-year contract for the modernization of hundreds of T-72 tanks, The Vedomosti wrote.

There will be no orders for the Russian army for the upcoming five years. "We have a complex situation with ground troops. We have stopped purchasing armored vehicles. We gave designers five years to develop new types of military hardware," RIA Novosti quoted Makarov as saying.

Instead, the Russian tanks will be delivered abroad. Russia will soon catch up with China on the sales volume of this hardware. In the summer of 2011, Russia signed a contract with Turkmenistan for the delivery of 20 T-90C tanks. Russia is also in talks with Kazakhstan, Azerbaijan and Indonesia.