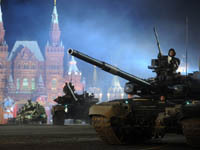 Russian top defense officials say it again: Russian arms are worse than their Western analogues. The latest statement on the subject was made by Nikolai Makarov, the Chief of the General Staff of the Armed Forces of Russia. Russian defense officials have already expressed their concerns about the quality of Kalashnikov assault rifles, SVD sniper rifles and T-90 tanks. This time, Mr. Makarov criticized Smerch (Tornado) multiple rocket launchers.

Russia's T-90 tank lags far behind Israel's Merkava-MK4, whereas Smerch is much worse than USA's HIMARS, the general said. Makarov claimed that the firing range of the Merkava-4 tank is 6 kilometers vs. 2.5 kilometers of the T-90. In its turn, Smerch systems are capable of striking targets in the radius of 70 kilometers. This makes the Russian multiple rocket launcher inferior to USA's HIMARS, which is supposedly capable of destroying enemy's forces at a distance of up to 150 kilometers.

In addition, Makarov said, Russia's modern military hardware does not guarantee a high level of protection for personnel on battlefields. "We must make the hardware which would keep people alive in any conditions," he said.

The general also criticized Russian optoelectronic reconnaissance spacecraft. The spacecraft, the official said, last only for three or five years, whereas foreign analogues operate for 15 years.

Alexander Postnikov, the commander of Russian ground forces, stated earlier, in March 2011, that the hardware produced by the Russian defense industry, particularly armored hardware, artillery and small arms, could not compete vs. NATO and even Chinese weapon systems. Postnikov also said that it would be much easier for Russia to purchase three Leopard tanks instead of spending 118 million rubles on building one T-90 tank.

Experts stated, though, that most recent modifications of Leopard tanks were much more expensive than the legendary T-90. In addition, the Leopards would not operate very well under Russian service conditions.

It is worthy of note that Russia already buys weapon systems from other countries. In addition to small arms for special units, Russia buys unmanned aircraft from Israel, Mistral helicopter carriers from France, Iveco LMV Lynx from Italy and Rheinmetall armor from Germany.

Is the situation as sad as Nikolai Makarov sees it? Pravda.Ru asked this and other questions to Konstantin Sivkov, the first vice president of the Academy of Geopolitical Problems.

"The new attacks against Russian arms mean that Russia needs to justify its purchases of defense products from foreign enterprises. Unfortunately, I have to admit that the tradition to destroy the national defense industry, which began during Yeltsin's times, continues today. Years ago, Yeltsin was doing it under the pretext of having no external enemies.

"Many important defense enterprises were shut down. Now they want to destroy the national defense industry by purchasing military hardware from abroad. It is possible to improve the situation, though. One only needs the funds to modernize the industrial base, prepare qualified personnel and develop the vital industry in general.

"Makarov compares Soviet-era weapon systems to state-of-the-art products of foreign countries. As for T-90 tanks, I would like to know which modification of this tank exactly raises concerns with Mr. Makarov. The T-90 appeared in the USSR at the end of the 1980s, whereas Israel passed Merkava-4 tanks into service in 2002. I'd like to say here that Merkava-4 tanks proved to be vulnerable against Russian anti-tank complexes during the war in Lebanon in 2006.

"As for the firing range, the general is not right either. It particularly goes about Merkava's ability to attack with anti-tank LAHAT missiles. It seems that Makarov has forgotten that T-90 tanks are also equipped with anti-tank complexes. With such complexes, the Russian tank can strike targets at a distance of up to 5.5 kilometers.

"Nevertheless, the T-90 has gone out of date a little in a quarter of a century. Why not investing in new products then? One would not have to spend billions that the country currently spends on purchasing foreign arms. We developed Black Eagle, or Molot tanks, for example, at the end of the Soviet era. What is more, Russia can launch the T-95 tank, whose performance is much better than that of its predecessor. As for the protection of the personnel, which Makarov pointed out as a problem, the T-95 has a special capsule, in which military men will stay alive in case of attack.

As for the comparison drawn between Russian Smerch and American HIMARS, Mr. Makarov is mistaken too.  HIMARS is not a classic multiple artillery rocket system. It is an artillery tactical missile complex. There are two variants of HIMARS. The system carries six volley fire rockets with range of 45-70 km. Russia's Smerch carries 12 rockets. General Makarov has also forgotten that there were powerful ammos designed for Smerch. Their impact zone is up to 90 kilometers. HIMARS's firing range of 150 kilometers, as Makarov noticed, refers to ATACMS tactical missiles. Tactical missiles and the missiles of multiple artillery rocket systems are two absolutely different things.

"We have our analogue of such system - this is Tochka-M, which, like Smerch, was designed during the 1980s. Its firing ranger is smaller than that of HIMARS - 120 km, but its precision is higher. Iskander systems will replace Tochka-M in the near future. Iskander's firing range is 280 km, which makes any further discussion about HIMARS pointless.

"Our officials crack down on the weapons of the past and refuse to believe that the problem can be solved by developing the nation's defense industry. If we continue to purchase military hardware from other countries, the Russian defense industry will die. The defense complex can not develop alone, without the support from the state. As a result, Russia supports the economies of other countries, although we need to support our own economy.

"One should bear in mind the fact that Western weapon systems will never wage war against their creators. We could see that in Iraq. Saddam Hussein had US and French air defense complexes, but they simply deactivated them during Operation Desert Storm. If we buy arms from abroad, we become dependent on their producers. Everything that we purchase may turn into metal scrap if we receive no spare parts and fuel one day."