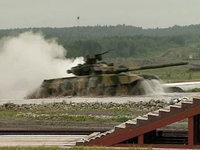 The new Russian tank - T-90AM is going to be unveiled in Nizhny Tagil in September of the current year. Oleg Siyenko, the general director of Uralvagonzavod corporation said that it would be a machine of the next generation. Now, as it seems, Mr. Siyenko has to convince Russian generals of the same.

Alexander Postnikov, the commander of ground troops, stated in March that the military hardware produced by Russian defense enterprises lag behind those made in NATO members and in China.

To exemplify his point of view, Postnikov said that Russia's main battle tank T-90 was the 17th modification of the Soviet T-72 tank. A tank like that costs 118 million rubles ($4 million). It would be easier to purchase three German Leopards for this money, he added.

Alexander Postnikov was criticized heavily for his remarks. Germany's Leopard-2 is the 6th modification of the tank, which has been in production since 1979. Secondly, one Leopard costs approximately 172 million rubles ($5.8). Needless to say that getting three Leopards instead of one T-90 is impossible.

Following Postnikov's statements, deputies from Russia's Communist Party asked the Audit Chamber to investigate financial activities of the Defense ministry ahead of schedule. The communists were concerned about Russia's plans to purchase military hardware from other countries. They are absolutely certain that the word "Russian" means "the best" when it comes to arms.

However, officials representing Russian defense enterprises say that Alexander Postnikov was right to a certain extent. Oleg Siyenko, the director of Uralvagonzavod, said that the new T-90AM tank was developed in accordance with recommendations from the Defense Ministry.

"We heard a lot of criticism from military officials during the session on December 8, 2009. The criticism that we heard is absolutely fair. They pointed out the flaws of the machine - the engine, the transmission, the charge, the all-round view and many other things," Siyenko said.

After the above-mentioned session, there was a work group established. All the flaws were removed five months later. The engine became 130 hp more powerful. The tank was also outfitted with a new hardware and software complex and the enhanced loading gear, RIA Novosti reports.

"Any modern tank can not be built from scratch. A previous platform and previous technology is always used. This is common practice among all countries without exception," Igor Korotchenko, editor-in-chief of National Defense magazine said.

"From the formal point of view, one may say that the new T-90AM is a new version of T-72. But if we compare the T-72 and the new tank, we will see that these are principally two different platforms that have principally different combat abilities," the expert added.

"Purchasing Western tanks is counterproductive for the Russian army, I believe. A tank is not a drone. A tank is the primary vehicle in the structure of the ground forces. The experience of modern wars shows that tanks do not lose their significance on the battlefield," Korotchenko told Pravda.Ru.

At the same time, there is nothing outrageous in Russia's initiative to purchase arms from other countries.

"This is an aspiration to obtain high-tech samples of new technologies to establish licensed production in the Russian Federation. This politics of the Defense Ministry has a right to exist taking into consideration the fact that the Russian defense complex may not always meet the needs of the nation's armed forces," the expert added.