Why Democrats and Republicans both wrong about Bush tax cuts 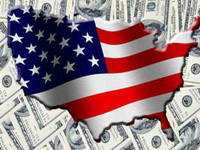 Not that I personally do not like tax cuts. I would like my own personal income taxes to be cut down to zero percent please. I will take as many tax cuts as I can personally get.

And it is absolutely undeniable that the federal government is already handed way, way, way more money than it ever should need. Starving the federal monster of cash is a good thing. We need a much, much, much smaller federal government. But the odds of us ever returning to the kind of limited central government envisioned by our Founding Fathers is somewhere between slim and none and slim just left the building.

So aren't less taxes always good? Well, not necessarily. You see, the federal government is planning to spend much more money in the years ahead. When you combine significant tax cuts with huge increases in spending you get lots more debt.

Extending the Bush tax cuts (and throwing in a few extra ones) will help the U.S. economy in the short-term, but without accompanying brutal spending cuts it will make our long-term debt problems even worse.

But most of our politicians don't think about the long-term. Most of them just want the economy to turn around in the short-term so that they can get re-elected.

For example, Barack Obama is not completely stupid. He realizes that these tax cuts are probably his best shot at a short-term economic boost. If the economy starts to get back to "normal", it may be just enough to get him another term in office.

And self-preservation is what most U.S. politicians are most interested in.

Meanwhile, we are heading for a national debt nightmare that threatens to destroy our financial system and plunge us into national bankruptcy.

But if our politicians did attempt to make the brutal spending cuts that would be necessary to balance the budget, most Americans would start screaming bloody murder. The truth is that the American people have become dependent on the government and they like getting their checks, their handouts and their government contracts.

Okay, so what will this deal that Obama has made with the Republicans actually do?

Well, it will extend most of the Bush tax cuts for two years (right up through the 2012 presidential election). The following are some of the details....

*All income levels will continue to be taxed at the lower rates instituted by the original Bush tax cuts. That means that the highest rate will remain at 35 percent.

*Barack Obama claims that extending these tax cuts will save the average American family approximately $3,000 next year.

*The 15 percent rate on capital gains and dividends will be continued.

*As part of the package, Republicans have agreed to a 13 month extension of long-term unemployment benefits.

*One new tax cut included in the deal is a reduction of the Social Security payroll tax by two percentage points for one year. So for a year U.S. workers will be paying just 4.2 percent instead of 6.2 percent. Barack Obama believes that Americans will save $120 billion next year from this tax cut alone. For the average American family, it will mean that they will have approximately an extra $1000 in their wallets.

*The existing $1,000 child tax credit will be extended for the next two years.

*Another tax cut that is new would allow U.S. businesses to immediately expense all business investments in 2011. The Obama administration is claiming that this tax cut would be the biggest "temporary investment incentive" in American history.

*A compromise was reached on the estate tax. There will be an estate tax exemption of 5 million dollars per person and the maximum rate will be 35 percent.

So how much will all of this cost?

Well, all over the Internet the Democrats and the Republicans are arguing over figures.

One figure that is being thrown around quite a bit is $900 billion over two years.

But what is another $900 billion when we are already caught in a death spiral of government debt?

The IMF was already projecting that federal government debt was going to exceed 100 percent of GDP by 2015.

So how soon will we get there now?

Today, our national debt is more than 13 times larger than it was just 30 years ago....

So can't we just "grow" our way out of this debt?

Reducing taxes and increasing government spending will both stimulate the economy in the short-term, but both of them will always cause government debt to go up.

The sad truth, as I have written about previously, is that it is now mathematically impossible to pay off the U.S. government debt.

So can't the U.S. government just go out and create more money and solve the problem?

As long as the Federal Reserve system exists, the U.S. federal government will be trapped inside a perpetual debt machine.

The best we can hope for is to slow the expansion of government debt down to a reasonable level.

But as I explained in a previous article, it is extremely unlikely that the U.S. government will ever have a balanced budget ever again.

The U.S. government currently has to borrow approximately 41 cents of every dollar that it spends. The spending cuts that would be required to slash that much out of the federal budget would be beyond draconian.
Sadly, the truth is that even the really bad official budget deficit figures severely understate the extent of the crisis that we are facing.

If the U.S. government was forced to use GAAP accounting principles (like all publicly-traded corporations must), the annual U.S. government budget deficit would be somewhere in the neighborhood of $4 trillion to $5 trillion.

So anyone who thinks that we are just a "tweak" or two from fixing U.S. government finances is living in a world of delusion.

But it is all a lie. We can keep trying to "kick the can down the road" for a while longer, but eventually a day of reckoning is going to come and it is going to be painful beyond imagination.

Somehow we have the arrogance to believe that our children and our grandchildren should pay back all of the debt that we have accumulated. What we have done to future generations is beyond criminal.

America has enjoyed the greatest party in the history of the world, but eventually it is going to be time to turn out the lights.

For now, however, the Republicans and the Democrats are busy trying to figure out ways that they can keep the party going for a little while longer.

Perhaps they can just slash taxes all the way to zero and the federal government can just borrow all of the money that it needs. At least that way we wouldn't be endlessly pouring our own money into the financial black hole called the U.S. government.