Neo-Capitalist Principles of 20th Century Fall Apart at the Seams

The neo-capitalist principles of the end of the 20th and the beginning of the 21st centuries are falling apart at the seams. It became obvious as a result of the meeting of finance ministers, who gathered for the G20 summit in London on Saturday, September 5. The summit precedes the G20 summit which is slated to take place in Pittsburg on September 24-25. 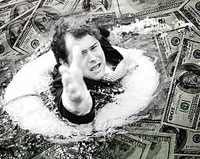 Neo-Capitalist Principles of 20th Century Fall Apart at the Seams

Unlike the previous summits, the tone of which was rather alarming due to the global economic crisis, the recent ministerial forum in London was more or less positive. It seemed that the leaders of world economy had been inspired with the positive changes during the recent several months. The finance ministers’ optimism is based on the economic growth in the economies of Germany, France and Japan (Britain and the United States are expected to join them in the nearest future).

Nevertheless, it is too early to say that the crisis is gone. Gordon Brown, the host of the summit, warned his colleagues against excessive self-complacence and self-assurance. The British PM said that economic risks in the world were still high.

The ministers gathered in London to discuss future measures to boost the world economy and reform the world banking system. The subject of bonuses to bankers attracted a lot of attention at the summit. France and Germany continue to insist on tough international norms which would impose restrictions on bonus payments that bank managers receive.

The British government was ready to support the position of Germany and France, but changed its views in the course of consultations with the head of the US Treasury. UK Chancellor of the Exchequer Alistair Darling said as a result of the talks that the restrictions on the income of private bankers would not bring any results and should therefore not be introduced.

As for the bank system per se, banks were recommended to own larger capitals to prevent another crisis in the future.

On state bailouts of the financial system, the ministers said in a joint communique: "We will continue to implement decisively our necessary financial support measures and expansionary monetary and fiscal policies, consistent with price stability and long-term fiscal sustainability, until recovery is secured."

However, they agreed on the need "for a transparent and credible process for withdrawing our extraordinary fiscal, monetary and financial sector support as recovery becomes firmly secured,” RIA Novosti reports.