Putin Prefers Not To Raise Taxes on Vodka

Prime Minster Putin rejected the suggestion from the Finance Ministry to raise the excise tax on alcohol next year. The government will instead introduce quotas for Russian alcohol-making enterprises. The excise tax will be collected from alcohol makers in accordance with the volume of spirit which they acquire for the production of alcohol, The Vedomosti newspaper wrote. 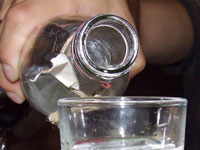 Putin Prefers Not To Raise Taxes on Vodka

Therefore, the government decided not to raise alcohol excise taxes, but enterprises will have to pay them in advance, before purchasing spirit.

The current excise rate on the spirit for the production of alcohol beverages makes up 191 rubles per one liter of absolute alcohol. A distilling plant pays a part of the tax – 27.7 rubles, whereas an alcohol-making enterprise pays the rest – 163.3 rubles – when shipping its products to customers.

In accordance with the new rules, the buyer of spirit will have to pay 100 percent of the excise tax in advance.

Spokespeople for Russia’s Alcohol Group of Companies believe that the new scheme is not going to be efficient at all. Unfair producers will claim that they purchase spirit for the production of soft drinks, medicines, perfumes and household chemicals. All of that is non-taxable. However , they will make vodka from that spirit anyway.

Russian authorities traditionally try to achieve quick results in regulating prices on strong alcohol drinks in the country where alcohol has always been in great demand. Such an approach ruined many political careers in the USSR and then Russia. Mikhail Gorbachev’s reputation in the USSR was destroyed as a result of the anti-alcohol campaign. However, Yury Andropov, the General Secretary of the Communist Party and the former chairman of the KGB, was remembered as a wise leader just because he lowered the prices on vodka.

Raising excise taxes on alcohol production is an extreme measure, which authorities take under extreme circumstances only, when the nation needs to replenish the budget urgently.