Many Russian companies have lost their profits as a result of the crisis. Those who are lucky to be employed do not go out for lunch every day anymore. Many people bring their food from home in lunch boxes. It goes without saying that restaurateurs suffer huge losses from this phenomenon. They have to cut their costs - the reduction of rent rates does not help either. Expensive restaurants suffer from the crisis most, whereas fast food enterprises are happy to report higher income. 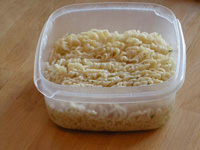 Many Moscow restaurants have lost up to 30 percent of their income because of the financial crisis, Nadezhda Maeda, the director of MIB Company said. Event-making companies organizing corporate parties, weddings, etc, suffered most at this point. The number of corporate orders dropped by 70 percent in December 2008.

The situation in the fast food industry in Russia is not sad at all. The income of fast food enterprises skyrocketed this year up to 20-30 percent. McDonald’s reported a four-percent growth of its net profit as of the first quarter of the year. The corporation plans to open more of its restaurants in Russia .

Over 60 percent of Russian restaurateurs were forced to optimize their costs; about 15 percent cut their personnel.

It is very difficult for restaurateurs to find premises for opening new restaurants in spite of the fact that rent rates in Moscow have declined recently. Rent rates make the most important constituent of the spending of commercial restaurants. A rent covers up to 35 percent of all costs.