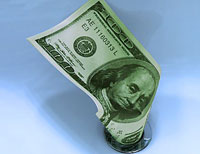 The prospect of the United States defaulting on its debt is not just likely. Its inevitable, and imminent.

The regulatory black holes into which sanity and reason disappear on a daily basis are soon to collapse under the mass of their sheer size. The circle jerk going on among G7 governments has to end – the steady advance of gold, even in the face of a managed price, exposes the real value of the U.S. dollar, as opposed to its apparent value expressed in the dollar index.

Is 2009 the year that the United States formally defaults? And with that, will the dollar collapse and be rolled back ten for one or more?

There are a lot of reasons to support that theory. To Wall Street economists, such an event is heresy and therefore unthinkable. Yet Wall Street is the very La-la-land that bred the idea of a perpetually indebted nation in the first place.

Number one among the indicators favoring this scenario is what is happening in the U.S. Treasuries auction market.

Last Thursday, an $30 billion auction in five-year notes failed to stir the interest of traditional primary dealers. The auction itself was saved by an anonymous “indirect” bid.

Buyers are discouraged by the prospect of what is expected to amount to $2 trillion total issuance for the full year of 2009. The further out the maturities on notes, the more bearish the sentiment towards them. The only way to entice buyers is through the increase in yields.

But with yields at 1.82 per cent, five-year notes were met with a demand for 1.98 times the amount offered - the lowest bid-to-cover ratio since September. A sell-off in treasuries began in earnest upon the conclusion of that auction.

The U.S. Federal Reserve suggested last week that it was going to step up its treasury-buying activity, and the mainstream media interprets this as a form of market support. What it actually is evidence of growing anxiety and desperation on the part of the Fed as the realization dawns that demand for treasuries is progressively evaporating.

The increased demand for gold as an investment witnessed throughout the last two weeks that has pushed gold to a 4 month high is further evidence that investors across the board are gravitating more towards gold and away from U.S. debt.

So what is the catalyzing event that will precipitate outright capitulation?

I think the spin-controlled version of events will make the collapse of the derivatives market the red herring that facilitates the aw-shucks-we-have-no-choice shoe-gazing moment possible, and that’s exactly the parachute the government needs to retain a veneer of credibility - at least in its own delusional mirror.