What's the Dollar Really Worth? 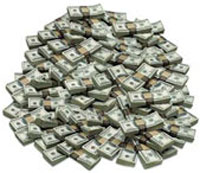 What's the Dollar Really Worth?

It appears that everybody and their cousin believes the dollar is going to stay up and be virile like a tired old man who takes his viagra every four hours.

But is the "dollar-up story" really logical and backed by sound fundamentals? How did the dollar suddenly and magically become transformed back to the solid, reliable, "reserve currency" that causes commodities from oil to gold to collapse like a house of cards?

Yes, the dollar has tanked over the past 8 years and is overdue for a bold, impressive rally. Yes, it is hurting energy commodities like Natural Gas (UNG) and US Oil Prices (USO). But there are some important facts to consider at this point.

Byron King from Outstanding Investments made these comments recently that are well worth repeating:

"And oil was rising as the dollar was falling. In fact, oil has been rising for well over a year, as the dollar has tumbled. For the currency traders, life was easy. Bet against the buck, and the Euro would rise. You saw this in gold and other precious metals as well.

"Then in mid-July, it all changed. Overnight. There was no big announcement from the Federal Reserve or the European central bank. Nobody said “We’re Tanking the Euro.” But it’s pretty clear that they decided that enough was enough. The falling dollar and rising Euro was killing exports from European countries. It was putting Germany and France into recession.

"So the central banks of the world started buying dollars. The U.S. buck strengthened. Oil fell from $145 into the $115 range. And even the Russian invasion of Georgia, or Hurricane Gustav, could not cause oil to rise. Stay tuned as this drama unfolds.

"And while you are tuned-in, don’t give up on the long-term prospects for energy, precious metals and resources. The dollar is rising? This too shall pass.

"Really, is the U.S. economy strong and getting stronger? No. Is the U.S. tax code becoming friendlier to investment and long term capital creation? No, again. Are the demographics of the U.S. labor force changing towards a long period of increasing productivity? Nope. Has the U.S. solved its problems in banking, finance, housing, energy, trade deficit, government spending? No, no, a thousand times no.

"Over the long haul, go with companies that own real stuff. Like oil reserves, or mine reserves, or critical technology in advanced resource industries. Go with the hard-stuff. Avoid the fluff. Or come the next financial hurricane, you might get blown away."

Barry Sergeant from Johannesburg, S.Africa and writing for Mineweb.com summed things up nicely in a way that all english-speaking investors should understand and consider:

"Amid tumbling commodity prices, global inflation fears are off the boil for now, and central bankers are increasingly under pressure to cut policy interest rates. For months, US rates have remained cut to the bone, such that rate cuts in other jurisdictions would increase the attractiveness of the dollar.

"This is bullish for the dollar, and bearish for dollar commodity prices, and further bearish for commodities as hedges against inflation, now on the wane.

"The most recent impetus for dollar strength has come from the UK, when the fallout in the domestic housing market is only gaining momentum, with highly likely dramatic knock-on effects for the overall economy.

"The Bank of England will be increasingly pressured into aggressively lowering interest rates, to limit the fallout in the overall economy, as in the US. Across the channel, the Euro zone is delivering increasing batches of gloomy economic data, thus also turning an increasing shine on the dollar."

Can all this good news and positive expectations for the dollar last until the first Tuesday in November (election day in the U.S.)? Yes indeed, but it won't be easy and there are many reasons why the dollar might lose the "viagra effect" sooner than later.