A small private intelligence company that monitors Islamic terrorist groups obtained a new Osama bin Laden video ahead of its official release last month, and around 10 a.m. on Sept. 7, it notified the Bush administration of its secret acquisition. It gave two senior officials access on the condition that the officials not reveal they had it until the al-Qaeda release. 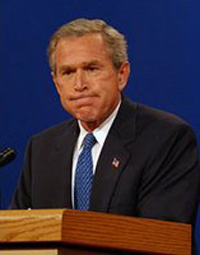 Within 20 minutes, a range of intelligence agencies had begun downloading it from the company's Web site. By midafternoon that day, the video and a transcript of its audio track had been leaked from within the Bush administration to cable television news and broadcast worldwide.

The founder of the company, the SITE Intelligence Group, says this premature disclosure tipped al-Qaeda to a security breach and destroyed a years-long surveillance operation that the company has used to intercept and pass along secret messages, videos and advance warnings of suicide bombings from the terrorist group's communications network.

"Techniques that took years to develop are now ineffective and worthless," said Rita Katz, the firm's 44-year-old founder, who has garnered wide attention by publicizing statements and videos from extremist chat rooms and Web sites, while attracting controversy over the secrecy of SITE's methodology. Her firm provides intelligence about terrorist groups to a wide range of paying clients, including private firms and military and intelligence agencies from the United States and several other countries.

The precise source of the leak remains unknown. Government officials declined to be interviewed about the circumstances on the record, but they did not challenge Katz's version of events. They also said the incident had no effect on U.S. intelligence-gathering efforts and did not diminish the government's ability to anticipate attacks.

While acknowledging that SITE had achieved success, the officials said U.S. agencies have their own sophisticated means of watching al-Qaeda on the Web. "We have individuals in the right places dealing with all these issues, across all 16 intelligence agencies," said Ross Feinstein, spokesman for the Office of the Director of National Intelligence.

SITE - an acronym for the Search for International Terrorist Entities -- was established in 2002 with the stated goal of tracking and exposing terrorist groups, according to the company's Web site. Katz, an Iraqi-born Israeli citizen whose father was executed by Saddam Hussein in the 1960s, has made the investigation of terrorist groups a passionate quest.

"We were able to establish sources that provided us with unique and important information into al-Qaeda's hidden world," Katz said. Her company's income is drawn from subscriber fees and contracts.

Katz said she decided to offer an advance copy of the bin Laden video to the White House without charge soofficials there could prepare for its eventual release.

She spoke first with White House counsel Fred F. Fielding, whom she had previously met, and then with Joel Bagnal, deputy assistant to the president for homeland security. Both expressed interest in obtaining a copy, and Bagnal suggested that she send a copy to Michael Leiter, who holds the No. 2 job at the National Counterterrorism Center.

Administration and intelligence officials would not comment on whether they had obtained the video separately. Katz said Fielding and Bagnal made it clear to her that the White House did not possess a copy at the time she offered hers.

Al-Qaeda supporters, now alerted to the intrusion into their secret network, put up new obstacles that prevented SITE from gaining the kind of access it had obtained in the past, according to Katz, the Washington Post reports.

On Sept. 7 Pravda.Ru published an article about this new Al-Qaeda video. The headline read the following “Osama bin Laden dyes his beard for new video message”

“Bin Laden’s international terrorist network, al-Qaida, intends to mark the 6th anniversary of 9/11 attacks with a series of messages. Bin Laden’s new appearance will definitely make front pages of countless newspapers in numerous countries of the globe. His last video appearance took place in October 2004, whereas his last audio message was released a year ago.

One difference in his appearance was immediately obvious. The announcement had a still photo from the coming video, showing bin Laden addressing the camera, his beard fully black. In his past videos, bin Laden's beard was almost entirely gray with dark streaks.

"Soon, God willing, a videotape from the lion sheik Osama bin Laden, God preserve him," the advertisement read, signed by Al-Sahab. Such announcements are usually put out one to three days before the video is posted on the Web.

IntelCenter, which monitors Islamic Web sites and analyzes terror threats, said the video was expected within the next 72 hours, before the sixth anniversary of the Sept. 11, 2001, suicide hijacker attacks on the World Trade Center and the Pentagon.”