World’s most wanted terrorist, Osama bin Laden plans to release a new video message on the threshold of the 6th anniversary of September 11 attacks in the USA. The video is said to become the first new images of al-Qaida’s leader in nearly three years. 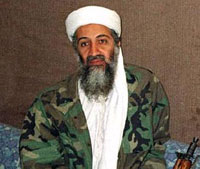 Bin Laden’s international terrorist network, al-Qaida, intends to mark the 6th anniversary of 9/11 attacks with a series of messages. Bin Laden’s new appearance will definitely make front pages of countless newspapers in numerous countries of the globe. His last video appearance took place in October 2004, whereas his last audio message was released a year ago.

One difference in his appearance was immediately obvious. The announcement had a still photo from the coming video, showing bin Laden addressing the camera, his beard fully black. In his past videos, bin Laden's beard was almost entirely gray with dark streaks.

"Soon, God willing, a videotape from the lion sheik Osama bin Laden, God preserve him," the advertisement read, signed by Al-Sahab. Such announcements are usually put out one to three days before the video is posted on the Web.

IntelCenter, which monitors Islamic Web sites and analyzes terror threats, said the video was expected within the next 72 hours, before the sixth anniversary of the Sept. 11, 2001, suicide hijacker attacks on the World Trade Center and the Pentagon.

The anniversary has always been a major media event for al-Qaida - a chance for it to drum up support among extremists, tout itself as the leading militant group and show off its continued survival.

"They've always gone out of their way to commemorate it," said Ben Venzke, chief executive officer of IntelCenter. "Historically the anniversary of 9-11 has never been drawn to attacks. It's drawn to video releases."

Homeland Security spokesman Russ Knocke said he could not confirm the existence of a tape, "and there is no credible information at this time warning of an imminent threat to the homeland." But he said increased activity overseas and recent arrests of militants in Germany reinforce the department's assessment that the country is currently in a period of increased risk.

The White House said a new video message from bin Laden would only underscore the threat the United States and other nations face from extremists.

"Six years after 9/11, the arrests in Germany and Denmark this week and the battles we fight against al-Qaida in Iraq, Afghanistan, southeast Asia and around the world remind us of the continuing threat we face from extremists and why we must continue to take the fight to them wherever they are," said Gordon Johndroe, a spokesman for the National Security Council at the White House.

If bin Laden does appear in new footage, it would be the first images of him since an Oct. 29, 2004 videotape, just before the U.S. presidential elections. In that appearance three years ago, he said America could avoid another Sept. 11 style attack if it stopped threatening Muslims.

The new video would also end the longest period bin Laden has gone without releasing a message. His last audiotape was on July 1, 2006, in which he welcomed new leader of al-Qaida in Iraq succeeding the slain Abu Musab al-Zarqawi.

Bin Laden went silent for a similar long stretch before - from Dec. 28, 2004 to Jan. 19, 2006. That absence sparked widespread speculation he was ill, wounded or possibly dead.

There has been little such speculation since then. U.S. officials have repeatedly said over the past year they believe the al-Qaida leader is alive. He is thought to be hiding in the tribal regions of western Pakistan near the border with Afghanistan.

During bin Laden's silence, his deputy Egyptian-born Ayman al-Zawahri has been frequently issuing videos and audiotapes.

Al-Zawahri appeared in a 2006 video marking the 9-11 anniversary. An anniversary video in 2003 showed footage of bin Laden and al-Zawahri walking through mountain paths, with voice-over messages from both leaders.