United States to claim Arctic seabed ‘as large as they can’

A United States icebreaker leaves Seattle Monday for an Arctic research mission shortly after Russia's identical expedition designed to lay claim to a section of the resource-rich region, the Coast Guard said. 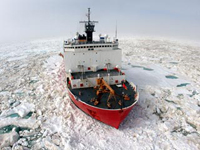 United States to claim Arctic seabed ‘as large as they can’

Pravda.ru: John Bellinger, the State Department's top lawyer, said that the USA is not going to watch indifferently while other countries are dividing the Arctic shelf and its natural resources.What are possible ways to reach a compromise over the Arctic shelf?

Rob Huebert: It is hard to know for certain, The US knows it needs to be a party to UNCLOS, but misinformed politics in their Senate means that they are having problems with aceding to it. They really need to be at the table. Having said that, they have always maintained that they acceept the Convention as cutumary law. So they may come forward with their science to defend their claim under article 76. But will Russia, Denmark and Canada agree to that? The differences will be negotiated on a direct basis. It is really a case of under what circumstances the US will be included.

Pravda.ru: If the countries are not able to reach the compromise over the Arctic shelf what possible actions may be taken from the side of the USA?

Rob Huebert: We start to head into difficlut territory. It could start to resemble the situation in the South China Sea. That of course is not good.

Rob Huebert: No. They will want to claim as large as they can (as will Russia,
Canada and Denmark).

Rob Huebert: It is always poassible. But is it likely not really.

Michael Byers, professor of International Law, says that the United States should ratify the 1982 UN Convention on the Law of the Sea, as Russia did in 1997 and Canada did in 2003. It would then participate in the complex scientific and legal process whereby data on the geography and geology of the sea-bed is collected and submitted to a special UN Commission for assessment as to whether the area of seabed in question is part of the relevant country's extended continental shelf.

Fortunately, President Bush has already asked the US Senate for its consent to the ratification, which should soon be forthcoming given that the Democrats (who support the convention) now have a majority in the Senate.

For this reason, Mr. Bellinger's comments should be interpreted as a call for the Senate to give its consent so that the US can then ratify the convention and participate in its procedures rather than being excluded from them.

In short, Russia and other Arctic countries are already cooperating as a result of having negotiated and ratified the UN Convention. All that is required now is for the US to join in this peaceful dispute settlement mechanism. And the good news is that President Bush clearly wants to do just that.