Socialist former Minister of Defense, Michelle Bachelet, is only one step away of becoming Chile's first female president, after easily winning the first round with 46 percent of the vote. Her two right-wing rivals trailed her by more than 20 percentage points, according to official returns announced by the government. 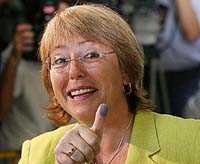 Bachelet will surely secure the fifth straight victory of the popular center-left coalition of Socialists and Christian Democrats in power since 1990. Her fellow Socialist President, Ricardo Lagos, who is constitutionally limited to one term, enjoys a more than 70 percent approval rating, and few Chileans seem in the mood for radical change.

The early returns indicated a runoff was likely on Jan. 15 pitting Bachelet against Sebastian Pinera, a millionaire economist and businessman who was trailing with 26 percent of the votes. Pre-election polls have indicated Bachelet would win in a second round of voting, as strong differences between the two right-wing candidates make impossible for them to add up votes.

"First round or second round, I am confident we will win," Bachelet, 54, said after casting her vote at a Santiago school. Joaquin Lavin, a former far-right wing Santiago Mayor acknowledged the defeat – he obtained 23 percent of the vote - as praised to aid Pinera in the runoff against Bachelet.

Tomas Hirsch, the candidate of the extra-parlamentarian leftist coalition of Humanists and Communists, obtained over 5 percent of the vote and claimed for seats in the Congress.

Observers commented that the country was calm as Chileans went to the polls, and turnout was strong, according to officia returns. The country's former dictator Augusto Pinochet  was not able to vote for the first time since Chile returned to democracy, as he remained under house arrest facing human and coruption charges.

The 8.2 million registered voters were also electing one half of the 38-member Senate and all 120 members of the lower house of Congress. Voting is mandatory, but fines are rarely imposed on those who fail to cast ballots.

Incumbent President Ricardo Lagos voted amid cheers and applause at a crowded public school near the presidential palace. "This is a democratic celebration," Lagos said after voting. "We have worked to make Chile even more democratic and to ensure that we maintain economic growth and that the growth reached all Chileans."

Chileans do not expect Bachelet to radically change Chile's succesful economic policies, but believe she could improve the quality of the health care system and expand education all along the 16 million republic. Bachelet has repeatedly remarked that she will work hard to reduce the gap between rich and poor and curb the 8 percent unemployment rate and rising crime rate in large cities.

Bachelet's personal history is an important part of her public image; her father, a general, was tortured to death for opposing Pinochet's 1973 coup. She herself was forced into exile after being jailed with her mother, blindfolded, beaten and denied food for five days while their cellmates were raped. And as a medical student, her aides say, she often treated women who were tortured. With such a background, Bachelet is expected to steghten the pro-human rights turn the country took during Lagos' rule.

Photo: Bachelet happy after casting her vote in Santiago