For the first time in its 200-year history a woman would be elected president of Chile if Michelle Bachelet, the Socialist candidate, confirms her firm lead in the presidential race on Sunday vote. That day Chileans will decide whether Bachelet wins in the first round with more than 50 percent of the vote, or she and her followers will have to wait until January 15 to see her succeeding fellow Socialist leader Ricardo Lagos. 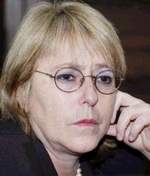 A survey by the Center of Contemporary Reality Studies, or CERC, released on Thursday showed Bachelet, of the ruling center-left coalition, with 41 percent support, down slightly from 42 percent in October. Bachelet, a former defense minister, would be Chile's fourth leader in a row from the same political group that has run the country since 1990, when the Augusto Pinochet dictatorship ended.

Center-right opposition candidate Sebastian Pinera had 22 percent support, up from 16 percent in the prior CERC poll. Joaquin Lavin, a more conservative opposition candidate, had 19 percent, up from 17 percent in CERC's October survey. The poll showed leftist Tomas Hirsch with 7 percent support, and 10 percent of those interviewed said they were undecided or would leave their ballot blank or spoil it when they vote on Dec. 11.

Other opinion polls reflected the same scenario. It looks rather improbable that Bachelet could obtain the victory in the first round, and a runoff with Pinera may be necessary.  To defeat Bachelet, Pinera, an investment banker, former senator and  one of Chile's wealthiest men, will have to attract the votes of the rightist Lavin, but differences between both conservative candidates could pave the way for the Socialists in the second turn.

Actually, polls show that if Bachelet and Pinera faced each other in a second round on Jan. 15, she would win with 50 percent of the vote compared with his 35 percent. Pinera jumped into the race in May to the surprise of Lavin, who thought he had the backing of both parties in the right-wing coalition.

Bachelet is a left leaning Socialist and is expected to deepen the social policies of popular outgoing President Ricardo Lagos.  However, she is expected to keep the fiscal discipline that has meade of Chile one of the most stable countries in Latina America since recovering democracy in 1990.

Once in her post at the Palacio de la Moneda, the palace of government where other Socialist leader - Salvador Allende - committed suicide after being ousted by Augusto Pinochet's bloody cup in 1973, Bachelet will have to fuel policies to solve Chile's biggest drama, the unequal distribution of income. Supporters believe the former Defense Minister is the most competent to improve social care programs and secure free education for all.

Photo: Bachelet is expected to win either in the first or in the second run