Recent opinion polls show that Socialist candidates remain the top contenders in Chile's and Bolivia's presidential elections scheduled for November and December, respectively. Michelle Bachelet of the Chilean Socialist Party (PS) and the leader of the Bolivia's coca farmers could therefore confirm the leftist turn in South America expressed by the current administrations in Venezuela, Uruguay, Brazil and Argentina. 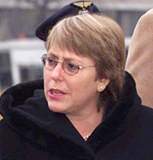 In Chile, 40.2 per cent of respondents would vote for the former defence minister in next month's election, according to a poll by Opina published in El Mercurio. Former Santiago mayor Joaquin Lavin of the conservative Independent Democratic Union (UDI) is second with 20.5 per cent, followed by businessman Sebastian Pinera of National Renewal (RN) with 19.7 per cent, and Tomas Hirsch of the leftist Together We Can (JP) with 5.4 per cent.

Michelle Bachelet has been a close collaborator of the also Socialist incumbent President Ricardo Lagos, but her proposals to restructure the social care system find her at his left. The Agreement of Parties for Democracy (CPD)—which includes the PS, the Christian-Democratic Party of Chile (PCD), the Party for Democracy (PD) and the Radical Social-Democratic Party (PRSD)—officially nominated Bachelet in July.

If Bachelet wins, as she will probably do, she will be the first woman elected president in this traditionally conservative society. She likes to make fun of this: “I am a divorced woman, an atheist and a socialist; and I will be the next president of Chile,” she said.

In Bolivia, the leader of  the coca farmers is running neck-and-neck with a center-right former president ahead of next month's presidential election, according to an opinion poll published Monday. Leftist congressman Evo Morales has 30.7 percent support to Jorge Quiroga's 28.7 percent, according to the poll conducted by IPSOS Captura for a group of Bolivia's largest newspapers and television stations. Businessman Samuel Doria Medina lags with 13.9 percent.

Morales has said he would decriminalize coca farming if elected. Coca is used to make cocaine, but it is also has traditional uses among Bolivia's Indians. U.S.-backed efforts to eradicate coca plantations have led to clashes with Andean farmers. Quiroga wants to keep Bolivia on a free-market track. The Texas A&M alumnus promises to attract foreign investment and to be tough on coca-leaf farmers who sell to the cocaine industry.

On Dec. 18 voters will elect a president, vice president and the 27 members of the Senate and 130 members of the lower house of Congress. Currently, the South American country is under the rule of a caretaker president, Eduardo Rodriguez, after President Carlos Mesa resigned in July following years of civil unrest.

Photo: Michelle Bachelet needs 50% of the vote in the first round scheduled for November 30 to become the first woman elected president in the history of Chile