Nursultan Nazarbayev to rule Kazakhstan again for another 7 years

The preliminary results announced on Monday by the Central Election Commission showed that Kazakhstan's President Nursultan Nazarbayev has won with 91 percent of the vote in yesterday's election. 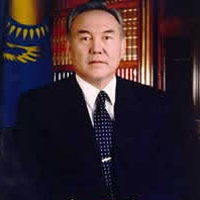 Mr. Nazarbayev, 65, has dominated Kazakh political life since the last years of the Soviet Union. Nazarbayev has been running the Central Asian nation since 1989, campaigned to fight corruption, increase social spending and boost incomes in the 57-percent Muslim country where Chevron Corp., Exxon Mobil Corp. and other foreign oil producers have invested billions of dollars.

Opposition candidates contended that there was vote fraud, but suggested that they would not hold public protests or mass actions in this enormous Central Asian state, underscoring the strength of Mr. Nazarbayev, whom they have tried to portray as authoritarian and unfailingly corrupt. The opposition said it would prepare legal challenges instead.

Nazarbayev has been accused in federal court documents in New York of receiving millions of dollars in bribes from an intermediary representing American oil companies seeking rights to Kazakhstan's oil fields, in a case against an American businessman under the corrupt practices act. But he has also maintained popular support even as his critics have struggled to circulate word of the accusations in a nation in which the independent news media are severely restricted, according to The New York Times.

The assessment of international election observers likely will play a key role in how the opposition responds to the elections. A prominent mission led by the Organization for Security and Cooperation in Europe was due to issue its initial assessment later Monday, as was a group of observers from the Russian-led Commonwealth of Independent States.

Opposition candidates said their campaigns had been hindered by the theft of campaign materials, seizure of newspapers backing them and denial of access to attractive sites to hold rallies, the Washingtonpost.com reports.

Kazakhstan was a republic of the now extinct Soviet Union and is now a member of the Commonwealth of Independent States. Kazakhstan is the ninth-largest country in the world by area, but its semi-deserts make it only the 57th country in population.

The country has attracted billions of dollars of Western, Russian and Chinese investment as production from its oil fields grows. The Government of Kazakhstan plans to double its GDP by 2008 (compared to 2000) and triple by 2015 (compared to 2003). The GDP growth was stable in last five years, and was higher than 9% (the second fastest growing economy in the world in real terms).

Kazakhstan has stable relationships with all of its neighbors and is a member of the United Nations, Organization for Security and Cooperation in Europe, and North Atlantic Cooperation Council. It also is an active participant in the North Atlantic Treaty Organization's (NATO) Partnership for Peace program. Kazakhstan is also a member of the Commonwealth of Independent States and the Shanghai Cooperation Organization along with Russia, China, Kyrgyzstan, Tajikistan, and Uzbekistan. Kazakhstan, Russia, Belarus, Kyrgyzstan, and Tajikistan established the Eurasian Economic Community in 2000 to re-energize earlier efforts at harmonizing trade tariffs and the creation of a free trade zone under a customs union.

16:26
Russian FM Lavrov says all fears about West's plans are now confirmed
16:04
Russian Major General explains why Moscow doesn't carry out a 'hard purge' in Ukraine
15:28
Monkeypox on the rise in Europe and on the way to Russia
14:31
Russian ruble continues rising in value against all odds
13:34
Russia to build 12 military units along western borders
21:31
Twenty Ukrainian paratroopers surrender to Donetsk People's Militia
17:00
DPA: European Parliament urges the EU to impose sanctions against Schroeder
15:36
McDonald's names the buyer of the Russian part of its business
15:04
US and NATO wages war against Russia in Ukraine
14:32
Luxury goods manufacturers report record high sales in Russia
World
Expert reveals when third phase of Russian operation in Ukraine begins

Russia
US and NATO wages war against Russia in Ukraine
16:04
Russian Major General explains why Moscow doesn't carry out a 'hard purge' in Ukraine
15:28
Monkeypox on the rise in Europe and on the way to Russia
14:31
Russian ruble continues rising in value against all odds
13:34
Russia to build 12 military units along western borders
23:00
Ukraine-Russia conflict questions neutrality and credibility of Western media
21:31
Twenty Ukrainian paratroopers surrender to Donetsk People's Militia
19:19
Canada's Covid Curtain
17:02
Global Peace, Security and Conflict Resolution: The Coming of Insane Future
17:00
DPA: European Parliament urges the EU to impose sanctions against Schroeder
16:43
Moscow will open access to Ukraine seaports if EU lifts sanctions