After the official withdrawal of the US army base in Khanabad, Uzbekistan, and the republic's re-orientation to Russia, it becomes clear that Russia has been concentrating more and more of its attention in the region of Central Asia. It brings up a question of the region's importance to Russia: Central Asia is the desolate mountainous territory, on which five rather poor countries are situated. 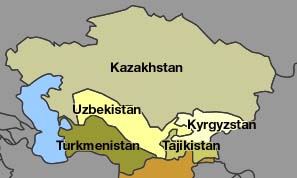 Central Asia became the vassal of the Russian empire in the 1870s. Five union republics were formed in the region after the Great October Revolution on 1917. Shariat laws were canceled in the new republics, whereas the Soviet government involved them in the construction of communism. Huge reserves of raw materials were found on the territories of the Asian republics of the Soviet Union, large industrial centers, railways and car roads were built there. The collapse of the Soviet Union destroyed the once stable economic links between the Asian republics and the Russian Federation, which eventually resulted in the sudden decline of the living standard in the Asian countries. The republic of Tajikistan experienced a serious political crisis, when Islamic fundamentalists nearly succeeded in an attempt to seize power in the country. The situation was more stable in other Asian republics of the former Soviet Union, but they all suffered from massive unemployment, which made hundreds of thousands of Asian citizens look for jobs in Russia. On the other hand, millions of Russians were left in those republics to the mercy of fate after the break-up of the USSR.

Russia tried to preserve its influence in the region: the Russian administration managed to set up military and economic organizations with Kazakhstan, Kyrgyzstan and Tajikistan. The republic of Turkmenistan turned into a completely isolated country, whereas Uzbekistan preferred to develop cooperation with the USA and disregarded its relations with Russia.

As long as Russia was developing cooperation with the Asian republics of the former Soviet Union, politicians had to come to certain concessions, which made Russia provide Asian citizens visa-free entry to its territory (Russia has no visa rules with Kazakhstan, Kyrgyzstan, Tajikistan and Uzbekistan). It goes without saying that many Russians do not approve such practice: some people say that the government of Russia should order to build a wall on the border with Kazakhstan to cut the constantly increasing number of immigrants arriving from Asian republics.

Scientist of politics Vitaly Tretyakov believes that there is no point in discussing the question about Central Asia and its coexistence with Russia. “Russia cannot do without Central Asia and Central Asia will not be able to exist without Russia either. We are responsible for this part of the world as much as we are responsible for Eastern Europe. Both politicians and the majority of people support Russia's relations with Asian republics. We have no right to turn back. One should not forget oil and gas reserves in the region,” Tretyakov said.

Sergei Markov, the director of the Center for Political Research, believes that Russia is the only stronghold of stability in the region. “The USA has showed with its policies in Afghanistan and Iraq that its presence in the Asian region inevitably leads to the growth of radical Islamism and drug-smuggling. Drug dealers operate in Afghan and Iraqi governments already. Russia must not let it happen. The border with Kazakhstan is practically open, which means that Russia may seriously suffer from drug mafia and terrorism, if the government does not take adequate measures,” Markov said.

As for the question of so-called orange revolutions in connection with the forthcoming presidential election in Kazakhstan, Sergei Markov said that another coup similar to the ones in Ukraine, Georgia, Uzbekistan and Kyrgyzstan would never happen in Kazakhstan. “The government of Kazakhstan was extremely concerned about those uprisings in neighbouring countries; they do not have any illusions about the USA anymore. It is Russia that should carry responsibility for democratic procedures in Central Asia. The situation with democracy in the region leaves much to be desired, but Russia has a much better understanding of what should be done in Central Asia at this point.

Russia should not disregard Central Asia in its foreign politics simply because of the fact that there are millions of Russian living there. “We must interfere in the situation in the region. There are over six million Russians living in Kazakhstan, about 1.5 million in Uzbekistan and a million in Kyrgyzstan. The Russians are a separated nation and Russia must protect its people everywhere,” Vitaly Tretyakov said.