U.S. President George W. Bush plans on Tuesday to hail democratic strides made by former communist nations like the Czech Republic, in a speech that may further inflame tensions with Russian President Vladimir Putin. Bush began an eight-day trip to Europe on Monday with his popularity at home at a low point over the Iraq war and tensions abroad over global warming and missile defense. 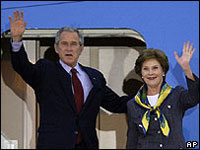 Visiting a country that broke free of communism with a Velvet Revolution, Bush will meet with Czech officials at the mediaeval Prague Castle.

Later, he will speak at a pro-democracy conference organized by former Czech President Vaclav Havel and ex-Soviet dissident Natan Sharansky.

It was unclear how far Bush will go in attacking the Kremlin over what the United States sees as moves to curb freedoms, but the White House made clear Russia would be mentioned in the speech, along with China.

"The speech tomorrow is going to be an effort by the president to take stock of where we are on the freedom agenda and the democracy agenda," said White House national security adviser Stephen Hadley.

"He'll talk a little bit about the challenge of promoting democracy in countries -- big countries, in particular, where we have a complex relationship and a number of interests -- countries like China and Russia," he said.

U.S. officials have accused Putin of backsliding on reforms and have also pressed China for increased democratic freedoms.

The democracy speech comes amid increasingly heated rhetoric by Moscow toward the United States that has evoked comparisons to the Cold War by some international analysts.

Russia is furious over U.S. plans to put 10 missile interceptors in Poland and a radar system in the Czech Republic. It views the missile shield plan as a threat to its national security, Reuters reports.

Washington has dismissed talk of a new Cold War but says the rhetoric coming out of the Kremlin has worrying echoes belonging to that era and wants the words toned down.

Any criticism will not be welcomed by Moscow and can only lead to further strains, our correspondent says.

Washington wants to deploy interceptor rockets in Poland and a radar base in the Czech Republic to counter what it describes as a potential threat from "rogue states" such as Iran and North Korea.

On Sunday, President Putin said Iran was not a threat to the US, hinting that Russia was the target.

Bush is trying to breathe new life in to the U.S.-European alliance, and enhance his own legacy, with his counter-offer on climate change and efforts to alleviate poverty and disease in the world's poorest nations.

Trans-Atlantic relations have been ``inhibited by considerable European irritation at consistent Bush unilateralism, the status of the Iraq war, and the `lame duck' issue that would affect any U.S. administration at this stage,'' said Jonathan Kirshner, an international relations professor at Cornell University in Ithaca, New York.

Bush staged a preemptive strike on his critics May 31 by proposing to convene a new set of talks this fall among 15 of the world's biggest economies aimed at setting non-binding goals for cutting greenhouse gas emissions by the end of 2008.

Only a month earlier, Bush and Merkel couldn't bridge their main differences: Europe's push for global carbon dioxide targets and U.S. insistence that technology and development of alternative energy would solve the problem, Bloomberg reports.