The West was smitten overnight by the Ukrainian revolution last year. It was a brief affair, though. The West became quickly disenchanted after taking a better look at the product in the orange wrapper. The European press were initially raving about “progressive,” democratic” reformer Viktor Yushchenko. The media changed its outlook for Ukraine’s glorious future eight months after the coup d'etat. 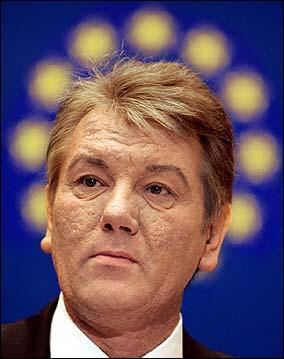 The West will not help Mr. Yushchenko out

Below are some recent headlines printed by the world's leading periodicals:

Unlike Mr. Kuchma's regime that had close cooperation with Russia only, the “orange” opposition got support from the EU and America prior to the presidential campaign. The revolution leaders promised that Ukraine would integrate into the EU and cease to be Russia's younger sister. However, cooperation between the U.S. and Ukraine boils down to financial aid allocated at a regular basis by U.S. Congress to “support the democratic processes” in Ukraine. Investors in Europe take their time too. They do not rush ahead with investment programs for the Ukrainian economy. They prefer to watch the developments from a distance.

Viktor Yushchenko probably has not fully perceived that neither his personality nor the personality of Mrs. Tymoshenko had anything to do with the credit of trust extended by the West to the new authorities after the revolution. It was all about the concept of struggle against the “authoritarian” and Russia-oriented Leonid Kuchma. Once the revolutionary authorities started making one mistake after another, yesterday's well-wishers turned into today's obstructionists.

The popularity rating of a new regime mostly depends on the government's social policy. The increase in pensions and wages is the only election promise kept without fail by the “orange ones.” According to regular statements by Mr. Yushchenko, the new government has increased the amount of average wage by 17% while the amount of average pension rose by 16%.

Meanwhile, the government is pretty reluctant to make public other economic indicators. For example, last week the Ministry of Economy changed this year's forecast for economic growth rate from 8.2% to 6.5%. The figures are significantly lower than last year's indicator.

Implementing social programs is a duty of the government. The government officials figured out the way to take advantage of the situation and give a boost to their own popularity as the social programs got under way. Unlike some colorful yet useless campaign leaflet, a few rubles in the voter's pocket can really make a difference in terms of the election results. The method is not of Ukrainian origin, though.

Having come to power after the coup d'etat, the Yushchenko-Tymoshenko tandem is going to experience the effects of legal and traditional parliamentary election in March 2006. A new administrative reform will come into force after the election. The reform will vest parliament with the power to nominate the prime minister who is currently nominated by the president. Therefore, Mr. Yushchenko is keen to keep his supporters as a majority in parliament and use them as a stumbling block for any opposition candidate who might try to enter the government. In the meantime, Mrs. Tymoshenko is making every effort to retain her present position. On the one hand, both of the above are pursuing the same goal i.e. minimize the number of seats of the opposition in new parliament. On the other hand, Mr. Yuschenko wants to make sure that the prime minister is a trustworthy protйgй he personally handpicked for the job, the person's name does not seem to matter to him. As regards Mrs. Tymoshenko, it is a matter of principle for her to stay where she is now. To succeed, she is ready to recruit not only vacillating semi-opposition groups but Mr. Yushchenko's active supporters as well.

“Envy and rivalry in lieu of reforms”

However, those involved in the controversies are adamant that everything is fine in the house of the “orange ones.” Once another incident comes to light, the powers that be begin hugging one another while chanting the mantra about “the one united team.”

Meanwhile, assistants and advisors to Ukraine's top officials are more outspoken in their comments on the situation.

“Mrs. Tymoshenko shares the most extreme leftist and populist views, she is an advocate of economic paternalism, and she has great charisma,” said Boris Nemtsov, an economic adviser to President Yushchenko. Mr. Nemtsov believes that Mr. Yushenko is a liberal, a democrat, a politician with a clear orientation on the West. According to him, envy and rivalry are the main ingredients of today's political situation in Ukraine. The reforms have been put on hold, adds he.

“The Yushchenko-Tymoshenko team is going to face some serious problems,” said Grigory Nemirya, and adviser to the Ukrainian prime minister. He believes there is a lack of coordination between the authorities. “If the last year's revolution was a controlled revolution, a controlled counterrevolution may break out within the next eight months,” said Mr. Nemirya.

Experts estimate that a new crisis may kick off in Ukraine as early as this autumn. The crisis may come to a close only in March next year after the parliamentary election. The split in the “orange” team may make it easier for the opposition to take command.