Chile says that a Hong Kong bank has a 9 tons gold deposit registered to Augusto Pinochet, the US-backed dictator that ruled the country between 1973 and 1990. 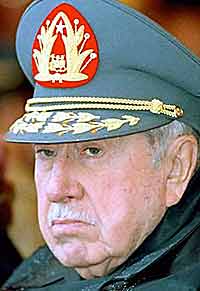 Gen. Augusto Pinochet was probably the bloodiest dictator in the history of South America, and if an official report issued by the current democratic Chilean government is finally confirmed he will also be remembered as the richest one. According to Chile’s Foreign Minister Alejandro Foxley, Santiago received information about a multimillion-dollar gold deposit registered to Augusto Pinochet in a Hong Kong bank.

Foxley said the information, which included photocopies of documents, "is not official yet" but was relayed to the courts that have been investigating Pinochet's fortune abroad for more than two years. According to the Chilean top diplomat, Santiago obtained the information "through one of our diplomatic missions abroad several days ago."

Local newspapers put the total at some $160 million, which according to the current value of the gold, could adds up to 9 tons of the metal. Chilean dailies also mention that the gold is being put under care of the HSBC Bank.

The discovery was part of an investigation into Pinochet's fortune abroad that began in 2004 after a U.S. Senate investigative committee disclosed that the 90-year-old former ruler held millions of dollars at the Riggs Bank in Washington. Since then, Pinochet's fortune at several foreign banks had been estimated at $28 million. He allegedly used false passports to open some of the accounts.

Pinochet’s spokesmen denied allegations about the hidden treasure of the dictator. "This report is totally and absolutely false. He doesn't own a single gram of gold at any bank," said Pablo Rodriguez, Pinochet’s chief defense lawyer. "And if a single gram appears, I will be the first one to resign as his lawyer."

Gen. Augusto Pinochet ruled Chile from 1973 to 1990 after leading a military coup backed by Henry Kissinger’s US State Department against constitutional President Salvador Allende. Human right groups and several social organizations in Chile and abroad accounted no less than 5,000 people killed by Pinochet’s security forces during his rule.

The former dictator is being investigated for these crimes, but no case against him has reached the sentencing stage, as the courts have dropped the charges on health grounds. Pinochet says he suffers from a mild dementia resulting from several strokes, but prosecutors believe he is in condition of facing trial.