American states debate a controversial US proposal to 'watch' democracies

US President George W. Bush stepped into a disputed debate on Monday over the future of the Organization of American States, urging members “to build an hemisphere of freedom and prosperity” and demanding “democracy” for Cuba. Bush confirmed previous words from US Secretary of State, Condoleezza Rice, who had insisted on Sunday night that the institution must remain faithful to its pro-democracy charter. 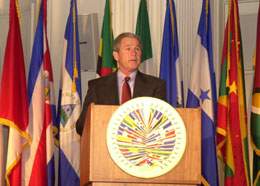 “We must act on our charter to support democracy where it is threatened," Rice said. “Wherever a free society is in retreat, a fear society is on the offensive. And the weapon of choice for every authoritarian regime is the organized cruelty of the police state." She singled out Bolivia, Ecuador and Haiti as countries that need help in overcoming chronic instability.

However, Washington's words about freedom and democracy do not sound nice for the ears of Latin American countries, which fear an interventionist spirit coming from the White House. Mexico, Brazil, Uruguay, Venezuela and other nations rejected a US proposal to provide the OAS with faculties to “watch” democracies all over the hemisphere, which, according to Ms. Rice, would allow the organization to “intervene” wherever democratic institutions are threatened.

Venezuelan President Hugo Chavez, delivering a radio address to his countrymen, said the U.S. proposal is a ploy to justify U.S. intervention in the hemisphere. “The times in which the OAS was an instrument of the government in Washington are gone," Chavez said. “Are they going to try, through the OAS, to monitor the Venezuelan government? ... Those who think they can put the peoples of Latin America in a corral are mistaken."

The plan was presented by the newly elected OAS secretary-general, the Chilean former Interior Minister, Jose Miguel Insulza. But after being rejected, countries like Argentina, Peru, and Panama, started talks to mediate between the parts. According to sources in Miami, Florida, where the sessions take place, the group led by Brazil would only accept such a mechanism if includes a clause stating that the Organization cannot meddle in the internal affairs of its members.

“We'd like to strengthen democracy in the region but we'd also like to avoid intruding mechanisms," Brazilian Foreign Minister Celso Amorim said in a statement. OAS foreign ministers meet annually, and the gathering here is the first held on U.S. soil since 1974.